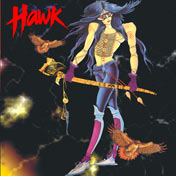 Review:
This is the one and only album the talented band known as Hawk, they simply rock! Singer David Fefolt sounds like a cross between Lizzy Borden and Ronnie James Dio. The band’s sound is good mix of classic and hair metal.

Tunes like “Tell The Truth”, “Battle Zone” and “Perfect Day” showcase the talent here. Doug Marks smokes on the guitar, and the rest of the band plays very tightly as well (including drummer Matt Sorum who would later join The Cult and Guns N’Roses. This album should have made the band famous; I give it two thumbs up!