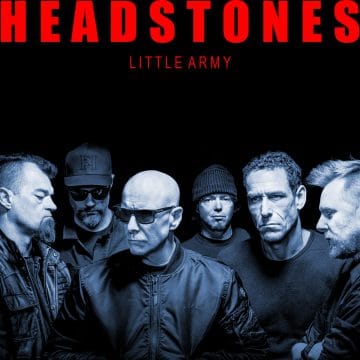 Review:
Aah, the Headstones. A fantastic post-punk meets alt-rock band from Kingston, Ontario, Canada. They began performing in 1987, and were signed to MCA Records in 1993. Their first album Picture Of Health went platinum in Canada that year, spawning hits like “Cemetery” and a Travelling Willburys‘ cover of “Tweeter And The Monkey Man”, both of which are still staples today on rock radio across the country.

I’m a long-time fan of the Headstones. I bought their first album the day it came out, and have been buying them ever since. I do have to thank Cadence Music for providing me with an advance copy of Little Army. I will still spend my cash on buying the album once it is released.

If you know the Headstones, Little Army is a real throwback to their ’93 release, Picture Of Health. There are some comparisons to the ’95 gold album Teeth And Tissue as well. Hugh Dillon and the boys are driving hard and hitting all the high points. They may not have classic guitar riffs or impressive choruses, but damn, these guys have attitude.

The opening song “Devil’s On Fire” is classic for this band. A basic guitar and rhythm, where Dillon carries the vocal aggression. There is an excellent harmonica solo that is off kilter with the rest of the song. “Broken” follows the same groove — nice guitars and pretty catchy bridge/chorus. This is hard stuff folks. Aggressive and angry. The title track “Little Army” contains enough swearing that the average radio station would just bleep the whole song. I’m feeling like “Sunlight Kills The Stars” is a cross between a Sid Vicious bass line and a Lou Reed vocal delivery. It’s interesting, but not overly listenable in the long term. Then again, “For Your Consideration” is pure punk. The song belongs on the Hard Core Logo soundtrack…. something Joe Dick and Billy Talent would have written. I remember seeing these guys live in 1997’ish. Between the gogo dancers perched on the speaker stacks and the band spitting into the front row, it all still makes sense to me two decades later.

“Captain Of The Shit Out Of Luck” is exactly what I would expect from the song title and the band. It’s nasty and in your face kind of music. The harmonica is a nice touch. But I’m not sure what to think about “The View Here.” There’s a strange keyboard line and the whole song is a bit quiet. The next track, seemingly an ode to their home town “Kingston” has a vocal delivery familiar to fans of the band. An interesting little song.  However, going from “Kingston” to “Los Angeles” is a bit of a trip for me. This track is a bit more radio friendly, using organs and a plain guitar line. It is similar to songs found on their last album Love+Fury, which wasn’t bad at all — just a departure from the band’s usual sound. Finally, “Don’t Think At All” is an outlier for the band, at least in the intro. The guitar riff and the drums reflect an ’80s hair metal sound. It’s different, unexpected, and quite good.

Singer Hugh Dillon has also been in several movies and television series, such as Hard Core Logo, Durham County, and Flashpoint… but he began with the Headstones.  I might suggest that Little Army is a step up from Love+Fury, but it also takes the Headstones back to their mid ’90s heyday. Do check them out.

Headstones‘ “For Your Consideration” video:

featuring the track For Your Consideration, off of the album ‘Little ArmyLittle Army available June 2 on Cadence Music