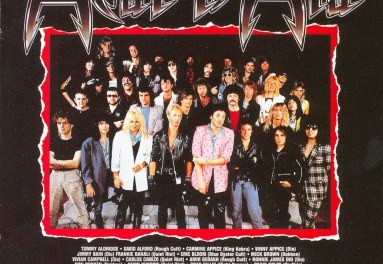 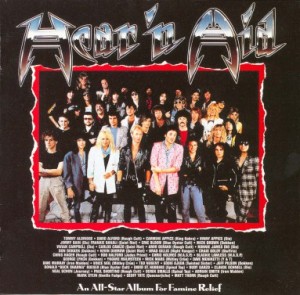 Review:
Once upon a time, heavy metal was seen as the bastard child of society with nothing but evildoers corrupting the minds of young innocent lives. Welcome to the 1980s where “legitimate” recognized groups, such as the Parents Music Resource Center better known as the PMRC, were taking on “offensive” music for which hard rock/heavy metal bands of course apparently led the way. Most of us listening to heavy metal music back in the day knew that all of the issues raised by groups such as PMRC was complete bullshit so it was really nice when the legendary late Ronnie James Dio along with his Dio bandmates Vivian Campbell and Jimmy Bain decided to do something that could not possibly be categorized as “evil” in any way.

Campbell and Bain were apparently attending a 48-hour charity Radiothon at the radio station KLOS and noticed that representation from hard rock or heavy metal stars was quite low. Both were aware of the success of Band Aid‘s “Do They Know It’s Christmas?” and USA for Africa‘s “We Are the World” so they forwarded an idea to Ronnie James Dio and together they decided to create a similar project exclusively built around artists from the hard rock/heavy metal scene. This culminated in a two day recording session on May 20 and 21, 1985 at the A&M Records Studio in Hollywood, California where a who’s who of heavy metal artists attended to record the absolutely stellar song “Stars.”

This might be one of the only times that you will ever see Sleaze Roxx do an album review of a compilation album but the Hear ‘n Aid project was so groundbreaking that it deserves to be mentioned and honoured here. This month also marks the 30th year anniversary of the album’s release so this is certainly a good time to revisit the album. Although I clearly remember viewing  the video for the song “Stars” over and over when it was first released, what I did not know until fairly recently was that an actual full-length album had been released for this project. I am now embarrassed to say that I was not one of the many that back in the day, purchased the album or single, which apparently raised $1 million within a year of its release towards famine relief in Africa. While it is commendable that many artists contributed tracks to the Hear ‘n Aid, the project would likely not have worked if not for the stellar single “Stars” which was by my account a masterpiece in being able to incorporate all of these star vocalists and even better, all of these star guitarists into the song. “Stars” also walked that fine line between a commercially accessible song with the easy sing along chorus while retaining its heavy metal feel.

From Ronnie James Dio‘s first sung words “Who cries for the children? I do” to the memorable intro guitar riff to the succession of amazing singers taking turns singing a verse or two to the extended guitar solos featuring some of greatest guitar players of all-time, “Stars” should go down as a game changing defining moment for heavy metal music. I always thought it was really cool also to see Quiet Riot‘s Kevin DuBrow with all of his peers given that the singer had ruffled more than a few people’s feathers with his outspoken and likely ill-advised comments in the months or years before. I forget exactly who he pissed off but it was nice to see him among his peers standing up for a good cause. If he could have only worn a cooler jacket than that awful pink jacket… To have some of the best heavy metal singers of all-time singing on one track was also cool as well — Judas Priest‘s Rob Halford, Queensrÿche‘s Geoff Tate, Ronnie James Dio of course and even Dokken‘s Don Dokken whose voice these days pales in comparison. The guitar solos were amazing to hear and see as well with such guitar greats as the incomparable Yngwie J. Malmsteen and Dokken‘s George Lynch as well as a slew of underrated guitarists such as Dio‘s Vivian Campbell and Twisted Sister‘s Eddie Ojeda. And who better to handle the rhythm guitar melody lines than Iron Maiden guitarists Dave Murray and Adrian Smith?

I am not sure how hard it was for Dio, Campbell and Bain to recruit all the all-star heavy metal musicians that ended up comprising Hear ‘n Aid but it would have been even better to have such greats as guitarist Eddie Van Halen playing his guitar solo alongside Malmsteen and Lynch. What about if Twisted Sister‘s Dee Snider sang on the track given that he would testify less than four months later on behalf of heavy metal artists at a Senate Hearing in the U.S.A. against the PMRC? Perhaps looking back, some of these heavy metal artists that were not able to answer the call look back in regret at not being part of such a great project as Hear ‘n Aid. Whatever the case, Hear ‘n Aid was an amazing and apparently unfortunately one of a kind project that puts yet another feather in the cap of the legendary late Ronnie James Dio.

Hear ‘n Aid was a one-off project of the heavy metal/hard rock scene of the 1980s to raise money for famine relief in Africa. According to Ronnie James Dio’s…