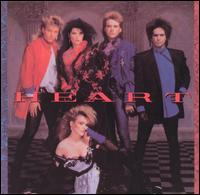 Review:
A perfect blend of hard/heavy rock and ballads and one of my personal favorites, the very talented Wilson sisters released what would become one of their most successful albums. Songs such as “If Looks Could Kill”, “The Wolf” and “Shell Shock” prove these girls can rock really hard while “All Eyes” and “Nobody Home” slow things down. Of course who could forget the hit singles/videos “What About Love” (#10), “Never” (#4), “Nothin’ At All” (#10) and the #1 smash hit balled “These Dreams” (ironically featuring guitarist Nancy Wilson on lead vocals). The crisp production and melodic tunes helped push this release to multi-platinum.

This album marked the debut for them on Capitol records and also featured a new line-up — Howard Leese being the only original member remaining with the Wilson sisters. This self-titled release also paved the way for Heart‘s massive comeback in the mid 80’s/early 90’s. Heart proved that women could rock and helped open doors for other lady rockers. I hope this band continues for a long time and this CD gets two thumbs up!