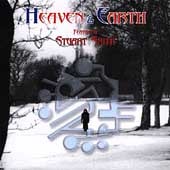 Review:
Blues based guitar rock seems to be a forgotten genre, and that is too bad because you will find some of the best guitar shredding on those types of albums – a prime example is Heaven & Earth. Guitarist Stuart Smith can make a guitar sing without having to be flashy or pretentious. On this release he has recruited a who’s who of hard rock for a collection of songs, ranging from straight-up blues to 70s hard rock, that were recorded between 1997 and 2004.

This truly is an ambitious effort as Stuart and his cohorts skip across genres, refusing to get pigeon-holed into one specific scene. At one moment you will be reminded of early Deep Purple while the next moment you could swear Stevie Ray Vaughan had been reincarnated. With sixteen cuts on Heaven & Earth, I am just going to concentrate on the ones that really stand out for me.

One thing I noticed is that every song sung by Kelly Hansen is killer, and it isn’t so much because of his voice (although he has great pipes), but because he seems to have been handed the rocking tunes. “Don’t Keep Me Waiting” reminded me of a song Glenn Hughes would perform (little did I know Glenn would later show up here) with its rolling beat. “Do You Ever Think Of Me?” is a melodic number with a killer solo and catchy chorus, “Trouble In Paradise” has a Molly Hatchet honky-tonk vibe while “Lose My Number” is just a straight-ahead rocker. Joe Lynn Turner sounds incredible on “Heaven & Earth” and “It’s Got To Be Love”, but it is “Memories” that I like the best, it reminds me of classic Krokus.

I’m giving bonus points for “Dreams Of Desire”, which is an instrumental heavily influenced by Johann Sebastian Bach. It’s a song that would fit better on a Christmas album, but I like its originality. Guitar aficionados should love Stuart‘s bluesy soulful licks. As for the songs themselves, rarely do they miss the mark. There is something here for everyone, and samples of each song can be found at www.heavenandearthband.com and www.blackstarrecords.com.