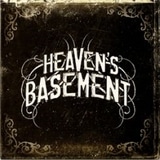 Review:
The self-titled trashed-up guitar-driven release from the United Kingdom’s Heaven’s Basement (formerly known as Hurricane Party and Roadstar) is not the generic flavor of the month. Quite the contrary, this CD is chock full of bluesy, ballsy tunes that are extremely fun and enjoyable to listen too.

More often than not find at least a couple of songs where I hit skip, but there is no filler to be found here on this EP. As a mater of fact, after a second listen through I could not find one song I liked above the rest; they are all great and beg to be played repeatedly. Each track is full of swagger and attitude and packed with sing along choruses and tons of unbelievable guitar work.

If pressed to describe Heaven’s Basement I would have to say they reminded me a lot of the bands that came out of the late eighties, except heavier. This is good time party music and demands to be played live. If the band’s live show is anything like this album then I will be standing in line to see them when they come round my way.

The only real downer here is that the disc is only six tracks and a little over twenty-five minutes long (not nearly long enough). I hope that we hear more from these guys in the near future because I know after hearing these tunes; I want more of this, much more. But alas, I am left salivating for more than these six amazing tracks. Take note of Heaven’s Basement and listen to this disc, it is that good!