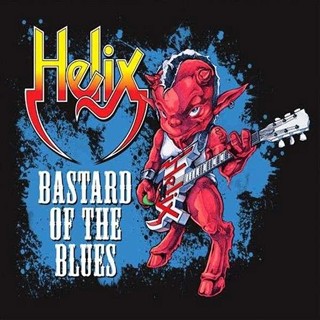 HELIX
BASTARD OF THE BLUES
Released on May 27, 2014 (Perris Records)

Review:
One of Canada’s longest running hard rock institutions simply refuse to quietly drift into retirement. Instead they continue to forge ahead and battle with upcoming rockers who weren’t even conceived when Helix reached their commercial peak in the mid-’80s.

On their thirteenth full-length studio album Helix occasionally sound a little long in the tooth, but by no means tarnish their legacy. Three fifths of the classic Helix line-up is along for the ride this time around, being rounded out by a new guitar tandem that prove their chops on Bastard Of The Blues. The veterans waste little time in getting down to business, starting things off with the thumping title track and frontman Brian Vollmer‘s scathing stab at local radio stations who refuse to play the band’s music in the form of “Even Jesus (Wasn’t Loved In His Hometown)”. It is towards the middle of the album where Helix really hit their stride though. “Screaming At The Moon”, with its stuttering “Eye Of The Tiger” reminiscent riff is a cool rocker but even better yet is the anthem “Metal At Midnight”. It may not reach the peaks of “Rock You” or “Heavy Metal Love”, but it would make a great addiction to the band’s incredible live shows.

“Hellbound For A Heartbreak” is another heavy number from the band and then comes the ballad “When All The Love Is Gone”. I’ve seen Helix rock a stage many times before, and in turn have seen Daryl Gray sing a handful of party anthems, but I never pictured the burley bassist to tackle such a song — and do it so convincingly! After the Wild In The Streets era sounding “Skin In The Game”, Bastard Of The Blues kind of goes out with a whimper. “The Bitch Is A Bullet” works far better as a song title than it does an actual composition and “Sticks & Stones” simply sounds like a Foghat barroom throwaway.

By no means perfect, Bastard Of The Blues does prove there is lots of gas left in the Helix tank. The album has far more in common with Vagabond Bones than it does with the band’s most memorable releases or the best forgotten early 2000’s era. The thing about Helix is that no matter what you think of their studio releases — and after 35 years you should know by now if you enjoy the band or not — they always deliver live, and I’m sure Vollmer and company will turn some of these tracks into hard hitting staples when they step onto a stage in a rundown bar.