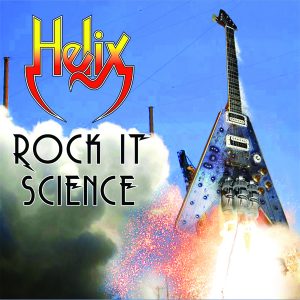 Review:
Helix are Canadian hard rock royalty. Active since 1974, Helix are ranked among Anvil, Lee Arron, The Killer Dwarfs, and a very select few other hard n heavy acts to come out of this country in the 1980s. Thanks to the efforts of Brian Vollmer in particular, Helix have been a constant entity for over 40 years. Hard to believe, but the band formed in Kitchener, Ontario, Canada for a high school battle of the bands in ‘74. Vollmer, the only original member, gathered new musicians under the Helix banner and released Breaking Loose and White Lace & Black Leather, in 1979 and 1981 respectively. The strength of those independent releases got Helix signed to Capitol Records in 1983, subsequently releasing albums almost yearly, from 1983 to 1990.

Helix in its long history, have issued a half-dozen live or greatest hits albums. What makes Rock it Science interesting is not necessarily “Deep Cuts the Knife” or “Rock You.” “Wild In The Streets” is my all-time favourite Helix song. Of course “Heavy Metal Love” is a classic. I love all these tracks.

My original draft of this review opined the addition of “Heavy Metal Love,” “Rock You,” “Deep Cuts the Knife” and “Wild In The Streets” as being predictable selections. However, after listening closely to these cuts, I find that several have actually been re-recorded by Helix rather recently, in fact. It’s not a re-imagining of the songs as the new recordings stick pretty close to the original.

I reached out to Brian Vollmer of Helix to ask about this. Apparently, Helix’s record company in the ’80s still owns the rights to some of the band’s biggest albums, and won’t re-release them easily. Brian explains…. (with slight edits)

“Rob Wells of the Trailer Park Boys told me that J-Rock from the show had written a rap song using sampling from “Rock You” and that the record company was asking so much money for them to use it that the song and idea were dropped from the show. I heard the song and it was hilarious. Anyway, it was at this point I decided to re-record the hit songs so this never happened again. The songs are close but obviously to [fans] that knows the music, you can hear the discrepancies. Let’s remember that I originally sang most of these in the early ’80s, so to sing some of them almost 35 years after the fact is no small feat.”

I think they are fantastic re-recordings, and I’m glad I now have them in my collection. Probably the most notable differences can be found on “Wild In The Streets” with the addition of a synth/organ in the chorus, and a much more raw guitar sound overall. Thank you to Brian Vollmer for his time and patience explaining the situation to me!

As for the remaining tracks, I didn’t start following Helix until No Rest For The Wicked in 1983. Therefore, “Billy Oxygen” and the gentle beginning to “You’re A Woman Now” are nice adds, for me to discover the origins of Helix.

Following the disappointing 1993 album It’s A Business Doing Pleasure –- of which, Vollmer admits should have been a solo project –- I lost track of new Helix offerings. So it was great to hear a selection from 1998’s Half-Alive — “Shock City Psycho Rock.” It’s a good little tune that kept Helix in the public consciousness, but lacked the flash and bluster of earlier recordings. The kazoo solo didn’t really help matters, either. Sadly, the rock and roll feel was out of sync with the dreck known as popular music at the time.

Get Up! was another album I didn’t have, but think I might need to look up.  It sees the band returning to its classic sound, but with a hint of pop and some sleaze bar style dancability. Not that “dancability” is a word, but I think you get my meaning. Vagabond Bones in 2009 is certainly in my collection, with “Make Em Dance” being a highlight of that album. “Even Jesus” is an ok song from 2014’s Bastard Of The Blues but there were stronger tracks on that record that could have been added either as well as, or instead of.

Finally, we get to the only new track on Rock It Science, “(Gene Simmons Says) Rock Is Dead.” I know it’s been on YouTube for several months and hopefully you’ve seen it already, because the video is hilarious, and the song itself is pretty decent. The video pokes fun at KISS bassist Gene Simmons, who made his now infamous comment that “rock is finally dead” during an interview earlier this year. I appreciate Vollmer‘s message, and with former Crash Kelly member Sean Kelly assisting with the composition, the music is pretty solid as well.

I like the fact that Helix included some early cuts, and some more recent ones. Pick up Rock It Science if you want to dip your toe in the Helix shallow end, and then find just about any full-length album and dive in headfirst.

from the Rock It Science CD – release June 2016