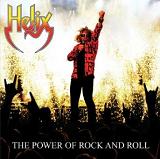 HELIX
THE POWER OF ROCK AND ROLL
Released 2007 (Perris Records)

Review:
Albums like this usually piss me off. It was late last year when Helix released Get Up, and now they have turned around and reissued it with four new songs and a different title. Whenever a band does this it comes across as a money grab, the type of prank you would expect from the floundering major labels.

What saves The Power Of Rock And Roll however is the fact that the newly added songs are great. “Fill Your Head With Rock” is a short rocker whose chugging rhythm makes it instantly memorable and a great opener. “Nickels & Dimes” comes the closest to the classic Helix sound as vocalist Brian Vollmer tackles it with his trademark sneer. “Eat My Dust” is a straight-forward rocker with some cool backing vocals while the last of the new compositions, “Living Life Large”, fits well with the original Get Up album concept.

“Get Up”, “The Past Is Back (To Kick Your Ass!)” and the renamed “The Power Of Rock And Roll” still stand up well a year after their original release. Brian Vollmer and company have the Helix name sailing in the right direction as they continue to bring the music to anyone willing to listen.

One of my major complaints with Get Up was its short length, and adding four new songs fixes that problem. However I’m not sure if fans that bought Get Up will be able to justify purchasing this CD for only four new songs, regardless of how good they may be. The final verdict is that The Power Of Rock And Roll all but makes Get Up obsolete.