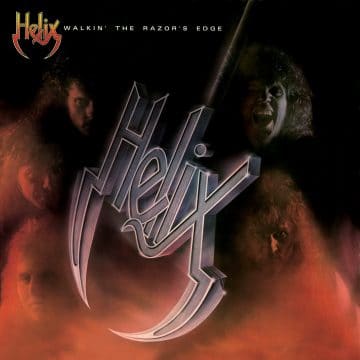 Review:
Helix have billed themselves as “Canada’s best selling heavy metal band.” If that is indeed so, then the band’s 1984 release is largely responsible for that claim. After having slugged it out in Canadian bars for years, the band released two independent records before signing to major label Capitol and producing No Rest For The Wicked in 1983, featuring one of their signature tunes “Heavy Metal Love.” Extensive touring followed, and the band’s classic line-up of vocalist Brian Vollmer, guitarists Paul Hackman (R.I.P.) and Brent Doerner, bassist Daryl Gray and drummer Greg ‘Fritz’ Hinz then regrouped to prepare the follow up release. This time, the band used several studios — Phase One in Toronto, Electric Lady in New York City, and Studio One in Atlanta.

Released in July 1984, Walkin the Razor’s Edge kicks off with what has become Helix’s calling card, “Rock You.” “Gimme an R – O – C – K” — we’re off to the races. The video was filmed in the band’s hometown of Kitchener, Ontario. This classic was not written by the band, but by Bob Halligan Jr. The album contained two cover tunes which went on to become hits for Helix — Crazy Elephant’s “Gimme Gimme Good Lovin” (supported by an x-rated video; MTV and MuchMusic stuck with the clean version) and A Foot In Cold Water’s “(Make Me Do) Anything You Want”, which the band also produced a video for. My personal favourites on this album are the gritty “Young & Wreckless”, “Animal House”, and “When the Hammer Falls” which are all tunes that sound great when cranked. The album went on to double platinum status in Canada, and Helix supported the release by hitting the road with Whitesnake, Quiet Riot, Mötorhead (Brian Vollmer once told me that Lemmy was a fan of the band) and Triumph.

I can share some personal memories of Helix, as I had the opportunity to be the assistant merch guy on the band’s 1987 cross-Canada Wild In The Streets Tour. The band was still playing arenas and small theatres, and it was a fantastic chance for me to see Canada while being paid (I’d never previously been west of Ontario)! Biggest memory — the sorely missed Paul Hackman; we had many long chats on the tour bus while driving to the next gig. Hackman was a a very gentle soul and talented guitarist. Lots of tour bus hijinks, with Fritz usually at the epicentre! Labatt’s Blue was a tour sponsor, so the bus cooler was always refreshingly full! My main takeaway from the tour, and watching the band on stage every night, was their hyper professionalism. The guys took their performance very seriously. Although tightly choreographed, they still rocked out hard and made it look fresh. They tinkered with their setlist when they felt a particular song wasn’t working out, and debriefed every show with their management in order to improve their presentation. My thanks for all of my hard work? On the last gig of the tour, they locked me in a big flightcase and rolled and twirled me around the floor of the venue. I had a pretty tough time recovering my balance when I finally ‘escaped’!

And all these years later, Helix are still grinding it out on the road, and a good chunk of their setlist is drawn from this landmark release. Long may they rock!

Canadian 80’s Rock / Metal An 80’s video which was re-broadcast on MuchMusic in the 1990’s. All rights are reserved, copyright and owned by EMI Music and / or the respective artist(s). No ownership is given or implied with this song or video posting. Go out and buy / support Canadian music !

Helix‘s “(Make Me Do) Anything You Want” video: