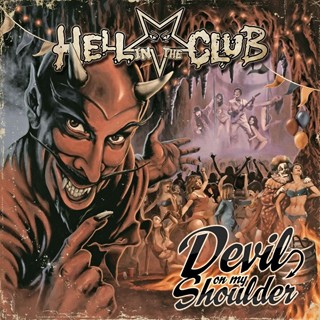 HELL IN THE CLUB
DEVIL ON MY SHOULDER
Released on November 4, 2014 (Scarlet Records)

Production:
Produced by Hell in the Club and Simone Mularoni.

Review:
Its been a few years since Hell In The Club dropped their debut album upon an unsuspecting public. Let The Games Begin reached the 2011 Sleaze Roxx Top 10 while the group quickly established themselves as Italy’s most promising new creation… and then things went quiet. The silence lasted longer than the entire career of most upstarts, but thankfully Hell In The Club have soldiered on — delivering yet another tasty slab of melodic sleaze metal with their sophomore album Devil On My Shoulder.

What I enjoy most about Hell In The Club is their ability switch between full-throttle sleaze, harmony filled melodic rock, and even a mixture of the two without blinking an eye — and playing each style convincingly. The album openers, “Bare Hands” and “Devil On My Shoulder”, once again display Hell In The Club‘s prowess when it comes to sing-along choruses and contain harmonies and crystal clear production that would rival anyone currently on the music scene — ranking right up there with Crazy Lixx or even Harem Scarem in their prime. “Proud” is probably the best example of this delivery, a flawless track that buries itself into your body and takes over your senses like a parasite invading its host.

As great as Hell In The Club throughout Devil On My Shoulder, I like them even better when they rev up and bury the accelerator into the floor board. “Whore Paint”, the furious “Pole Dancer”, the Steel Panther (minus the silly lyrics) sounding “Toxic Love”, and “Snowman Six” are full-on rockers that get the adrenaline pumping and fists flying while proving these Italians can rock with the best of them. For something a little out of the ordinary there is also the piano infused “Beware Of The Candyman”, a rollicking and good-time romp that shows practically everything Hell In The Club attempts turns to gold.

While there has been some time and separation between their debut and Devil On My Shoulder, Hell In The Club‘s impeccable execution and talents remain unchanged. Devil On My Shoulder is an almost perfect hard rock album, gift wrapped in harmonies and melodies that will make any self-respecting musician envious and hard rock fans foam at the mouth.