HELL IN THE CLUB 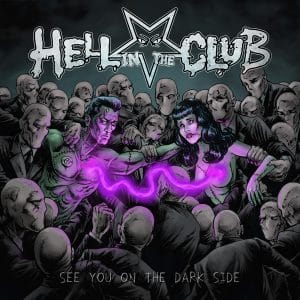 SEE YOU ON THE DARK SIDE
Released on September 15, 2017 (Frontiers Music Srl)

Review:
By now, most readers here will know who the hell Hell In The Club is. This Italian band is quite popular around these parts. The Sleaze Roxx Readers’ Top 20 Albums of 2016 placed Hell’s Shadow Of The Monster at #18 last year. At that time, we said, “Hell In The Club have the impressive distinction of having all three of their albums figure on the Sleaze Roxx readers’ year end lists. The Italian rockers’ debut album Let The Games Begin ended at up #17 in 2011 while their sophomore album Devil On My Shoulder finished at #14 in 2014. Hell In The Club didn’t reinvent the wheel with Shadow Of The Monster and that is likely the reason that the group is rewarded with a third straight album on the Sleaze Roxx readers’ year end list.”

Well, pretty much, See You On The Dark Side picks up where the band left off last year. After about two spins, it really hooked me like how I expected the band to sound.

The first two tracks lay the groundwork. “We Are On Fire” and “The Phantom Punch” both have neat, twisty guitar work and even some cowbell. “Little Toy Soldier” opens with a bluesy acoustic riff, and it’s great how the song evolves into an interesting rock song. It starts a little ’80s similar to Cinderella‘s Heartbreak Station and ends up close to Johnny Crash‘s Neighborhood Threat.

“I Swing Like Peter Parker” is fascinating. Good and hard for sure, dash of metal, salt of punk, and a whole lot of attitude… except… you get to the song’s 1:50 mark, and suddenly they go ’40s era swing. Keep in mind, I’m a huge big band fan going way back. And, what Hell provided over the next 30 seconds was really cool. The way they mixed the intro and end of the swing section together with the rest of the rock song showed the band knew what they were doing here, and not just faking it for effect.  It is like the way Neil Peart would do a drum solo, and end up being Buddy Rich. Yeah, I know — triggering — but it’s still cool. Anyway, I digress.

We move quickly along to “Houston We Got No Money”, then “A Melody A Memory” and after that, “The Misfit.”  Like many of Hell’s songs over the years, the band sometimes writes a relatively derivative ’80s influenced guitar riff. No problem though, because they take said riff and blow it up into something sounding intrinsically modern. What is kind of unique is “Showtime”, which displays elements of new-wave keyboards, solid musicianship, and some great guitar work.  I figure “Bite Of The Tongue” is the closest Hell will get to their over-the-top sleazy roots on the first two albums.

Hell In The Club have impressed me from their first release in 2011. It would be naive to think that most bands don’t evolve, change with the winds, or discover new influences… for better or worse. If you appreciate that, and thought Shadow Of A Monster was good, See You On The Dark Side will exceed your expectations.

Hell In The Club‘s “We Are On Fire” video:

Hell In The Club – “We Are On Fire” (Official Music Video)

Hell In The Club‘s “Houston We Got No Money” video:

Hell In The Club – “Houston, We’ve Got No Money” (Official Music Video)