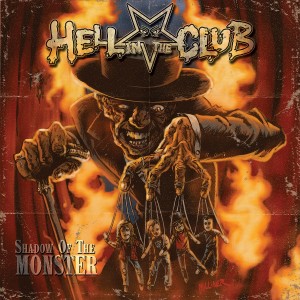 HELL IN THE CLUB
SHADOW OF THE MONSTER
Released on January 22, 2016 (Scarlett Records)

Review:
Hell In The Club describe themselves as featuring “…members of acclaimed acts such as Elvenking and Secret Sphere but their music stands out as something totally different: they mix classic hard rock and modern sounds, heavy metal and party songs, fifties rock’n’roll and anything in between.”

Shadow of the Monster is something a little different from Hell In The Club‘s first two records. It is more mature, and generally less aggressive lyrically than previous albums. The group’s debut album Let The Games Begin featured the song “Raise Your Drinking Glass” which is still one of my favourite party songs. 2014’s Devil On My Shoulder had “Pole Dancer” and “Save Me” as great rock tunes. I’m not hearing anything quite so bold and blustery as that on Shadow Of The Monster, and that’s alright too. Shadow still has its rock going for it.

Let’s start with the mid-tempo song “Naked.” It’s a pretty little track with pleasant guitars and absolutely nothing offensive about it. Good — that’s out of the way. Every other song on this album is hair flying rock. I’m thinking specifically of Skid Row or Guns N’ Roses inspired “Try Me Hate Me” or CrashDiet on lead off track “Dance!” “Enjoy the Ride” is Winger-like with a powerful chorus. A little blues, a bit of rock, a bit of sleaze defines “Hell Sweet Hell.” Probably the most unique track is “Le Cirque des Horreurs” (Circus of Horrors) which starts with a minute’s worth of quirky circus carnaval type music before ripping into a killer rock song.

This record will cast a long and dark “shadow” over the Sleaze Roxx’s Top Albums of 2016 lists. Shadow Of The Monster is a great cross section of Italian hard rock and worth every second of listening pleasure.