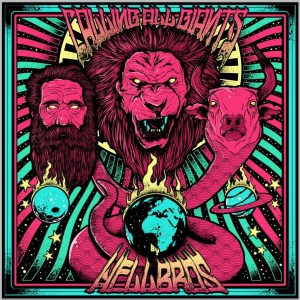 Review:
With their new EP Calling All Giants, Canadian rockers, Hellbros, have followed up their 2011 album Goodtime Machine with a gloomier feeling and more consistent effort. Gone are the recklessness and wild fury of songs such as “Street Party” and in are heavier mean songs that still really rock but in a darker type way.

For some reason, Calling All Giants reminds me a lot of Newsted‘s Metal and Heavy Metal Music records with the gruff vocals from Hellbros frontman Peter Jurt having a lot of similarities to Jason Newsted‘s own rough and gruff vocal delivery, and the heavy and dark but enjoyable music on each record. If anything, Hellbros fill a nice void with Calling All Giants since Jason Newsted has sadly disappeared off the face of the earth or rather just the public eye since in or about September 15, 2014.

If you’re looking for some catchy or sing along type songs, Calling All Giants is simply the wrong record for you. However, if you’re looking for some darker well played heavy music which still rocks or if you simply miss Newsted‘s brand of heavy metal music, Calling All Giants is for you! No one likes the word “mature” in rock n’ roll but Hellbros have matured in their songwriting and come up with more complex song structures and better overall musicianship. For instance, while none of the ten tracks on Goodtime Machine clocked over four minutes, three songs out of the five on Calling All Giants clock over the four minute barrier. There are no weak tracks per say on Calling All Giants. As has become the norm these days, Hellbros released less songs and unlike Goodtime Machine, there are no dips in quality. That being said, I really enjoy the first three tracks (“I Heart Drugs”, “Father Time” and “Hate”) more than the last two on the EP. Those first three songs have more energy to them and more of a rock n’ roll feel and straightforwardness to them than the latter two.

I got to admit that when I first heard Hellbros‘ Calling All Giants, it did not make much of an impression on me but I revisited it for the purposes of this review and it has really grown on me. The songs on Calling All Giants are more complex and layered than your typical hard rock or metal release so give it a few spins and I think you’ll get hooked just like I did! Finally, I am not quite sure what to make of the EP cover but don’t let that put you off in thinking that Calling All Giants is some sort of psychedelic record because it is so much more than that. One more thing, if you are interested in picking up the EP, you should contact the band directly because it seems that you can only find the single “Father Time” through the usual purchasing channels.

Production:
Recorded and engineered by Dean Hadjichristou
Mixed and mastered by Riccardo Pasini