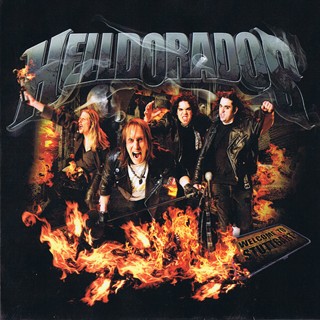 Review:
I always like when bands send promo packages that are slightly out of the ordinary, but the Helldorados probably didn’t realize they were setting themselves up for failure. Included in this package was a book of matches and what looked like a barf bag labeled ‘bag for the attack’ — the only conclusion I could come up with was that I was about to be sick and would resort to burning the CD upon listening… thankfully I didn’t feel the urge to do either.

I wouldn’t say these German hard rockers blew me away on this limited-edition EP (apparently their second release), but I wasn’t completely disgusted either. Right out of the gate with “Never Gonna Stop (We’re Helldorados)” the Helldorados prove they are full of piss-and-vinegar, and I’ve always liked when a band reference their own moniker during a song. But it is the next track “Girls” where the Helldorados really hit their stride — the song is a sleazy high-octane number with guitars blazing and the vocalist’s noticeable accent taking a back seat. From there we get “Changes”, the obligatory slow song that sounds almost identical to the type of mellow music Great White released on Rising — in fact, seemingly out of nowhere, vocalist Pierre becomes Jack Russell. Rounding out this EP is “Shout Out”, another hard driving effort that becomes somewhat of an anthem with its gang vocals during the chorus.

Based on their name I was expecting a W.A.S.P. clone, but instead the Helldorados are mostly a sleaze band with hints of traditional heavy metal — and overall, I’d be willing to listen to them again. At times Pierre‘s vocal accent got a bit annoying, but the band’s energy and especially Steve‘s guitar prowess usually made up for it.. Now the question is… what am I going to do with an unused barf bag in mint condition?