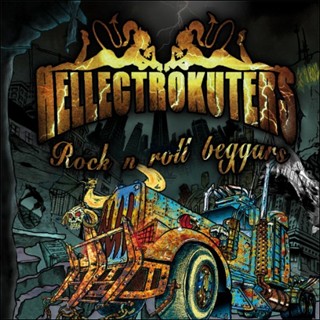 Review:
Judging by lyrics such as “Let’s get high ’till we die”, it appears as if the Hellectrokuters are hell-bent on burning out in a short period of time. If that is in fact the case, the French foursome’s debut album Rock N Roll Beggars is one deliciously decadent legacy to leave behind.

I’ve been spinning this album for a couple of weeks now, and no matter how hard I try to unearth a flaw, there isn’t one appearing. The Hellectrokuters have nailed it — perfectly capturing the essence of dirty ’80s hard rock and the fury of more modern rockers. This is the sound of old-school bashing heads with young punks who think they know everything about hard rock because they watched some special on VH1. This is the unbridled energy of Airbourne slamming recklessly into Joe LeSte‘s failed Beautiful Creatures project. This is… damn near perfect!

“Hey baby, get ready, this is rock ‘n’ roll” proclaims a female voice during the disc’s opening (stating what quickly becomes painfully obvious), and from there the tempo is set to a blistering speed. With the screaming chorus of “Hey Baby”, mixed with the rhythm of a young AC/DC, Rock N Roll Beggars gets off to a great start — and things are just heating up. “Action” seems determined to reduce your stereo speakers to a lump of molten metal while “My Rock ‘N Roll” kicks the hot ashes around until everything goes up in flames. “Break The Rules” and especially “Another Night” find the band adding a little early Lynch Mob harmony to their concoction, but don’t think for a second they are easing up in any way, as the furious “Born To Rock” quickly shows. Closing things out are “Rock This Way” and “New York 79”, and I’m certain that after these songs were recorded vocal cords blew apart, guitars burst into flames and a drummer died from exhaustion.

Do you want a ballad? Well too damn bad, you won’t find one on Rock N Roll Beggars. No sir, this is unapologetic rock from start to finish. The Hellectrokuters are stuck in a groove on this album where they seem determined to bash the listener over the head repeatedly until you are worshipping at their very feet. Did I mention Rock N Roll Beggars is an incredible CD? I must have forgotten while wiping the drool from my mouth and blood from my ears.