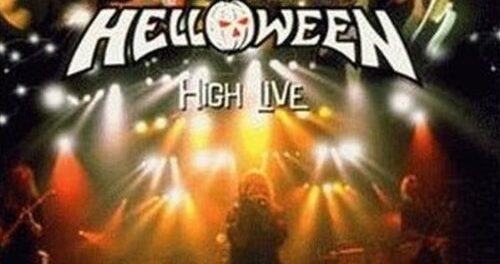 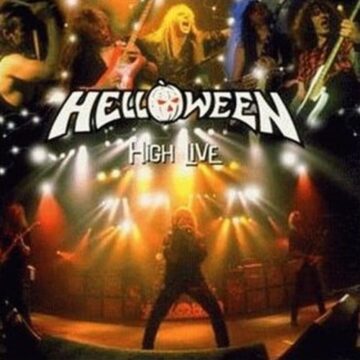 Review:
I fully intended that the next Helloween album that I would be reviewing would be their new self-titled one but upon seeing a Facebook message from the band mentioning that today was the 25th year anniversary of the release of their second live album High Live, my plans quickly changed. You see, I consider High Live to be one of my all-time favourite live albums so it would be a real shame not to have a review of such a great record on Sleaze Roxx. Funny enough, what I really like about High Live is that it was like the live celebration of a new but small chapter for the band with two stellar studio albums with Andi Deris on lead vocals.

Now, I have to tell you that I have been a massive Helloween fan ever since I heard “Ride The Sky” off the band’s debut full-length album Walls of Jericho (1985) and I have purchased and liked every one of their albums ever since including the rather controversial record Chameleon (1993). I can’t remember if I knew or not that frontman Michael Kiske had been replaced by Deris when I picked up Helloween‘s Master of The Rings album while backpacking throughout Europe in early 1995. However, I was very pleasantly surprised with just how good Master of The Rings really was and how Deris had really taken the band in a slightly different but splendid direction. Helloween‘s follow up album The Time of The Oath was another splendid album with some real gems that never seem to be played live including “A Million To One.”

Back in those days, I was working in downtown Toronto and every month or so, I would do the 20 minute walk up the city’s infamous Yonge Street to go browse CDs at the biggest HMV store in town. I didn’t really read heavy metal magazines anymore by that time so any new releases would be discovered while browsing through the CD racks. Upon seeing Helloween‘s double live record High Live, I quickly snatched it up. What struck me about High Live was that there were only four tracks from the Kiske era and the new songs more than held their own. In fact, Helloween‘s arguably biggest song “I Want Out” doesn’t even figure on High Live but for this live album, it doesn’t matter. It’s a showcase of just how good Helloween became with Deris in the line-up.

This takes me to an interesting but side conversation piece within this review — which Helloween line-up would be considered the best one? While there is little doubt that many will pick one of Helloween‘s line-ups with Kiske that played on one of the first two Keeper of The Seven Keys albums as the “classic” line-up, I for one think that the best Helloween line-up was the one featured on High Live with Deris on lead vocals, Michael Weikath and Roland Grapow on guitar, Markus Grosskopf on bass and Uli Kusch on drums. That line-up released some of the best ever Helloween studio records including Master of The Rings (1994), The Time of The Oath (1996) and The Dark Ride (2000) along with the studio album Better Than Raw (1998), the very good and diverse covers record Metal Jukebox (1999) and of course, High Live (1996). No other Helloween line-up has been so prolific in releasing so many really good albums.

Getting back to my review of High Live, the Deris era songs are so good that when I listen to the live album, I want to hear those Deris era tunes in a live setting rather than the sprinkling of Kiske era material. Tracks like “Soul Survivor”, “Power” and “Where The Rain Grows” sound fantastic on High Live. I really like that the ballad “In The Middle of A Heartbeat” was included on High Live because it is a very solid but underrated track that just does not get any recognition amid the mighty Helloween song arsenal. High Live has a heavier feel to it than Helloween‘s first and rather short live album Live In The U.K. (1988) as tracks such as “Before The War”, “We Burn” and “Steel Tormentor” can attest. My favorite Kiske era tune on High Live is “The Chance” which emanates from the, in my view, under appreciated studio record Pink Bupples Go Ape (1991). Deris really makes that track his own on High Live.

Overall, High Live represents in my mind a nice capsule in time of just how pleasantly transformed that Helloween became with Deris‘ arrival into the group. From Deris‘ songwriting contribution (he has co-writing or writing credits on 10 out of the 16 tracks on High Live) to his different (compared to Kiske) but very enjoyable vocal delivery, there is no doubt that Helloween became more than re-energized with him in the line-up. High Live is really the perfect showcase of what a positive difference a new singer can make to an already established but slightly lost amazing band.