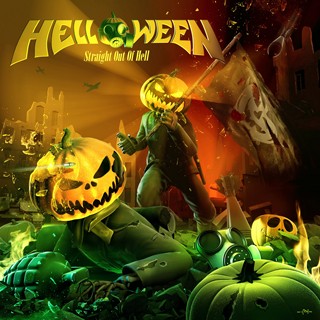 Review:
It’s not every band that can deliver exactly what they are known for, and what they announce that they will deliver, but Helloween has done just that with their latest CD Straight Out Of Hell. Prior to its release guitarist Michael Weikath announced that Straight Out Of Hell would be a continuation of their last two albums, Gambling With The Devil and 7 Sinners, with less doom and gloom and noticeably more positive.

What you really have here is an attempt at the best of Helloween‘s prior releases, with Andi Deris as lead vocalist, all combined into one CD. You have everything from the similar sort of piano intro of “If I Could Fly” on the new track “Waiting For The Thunder” to the dual guitar melodies found so prevalently on the Master Of The Rings album showing up on “Far From The Stars”.

I find myself liking most of the tracks on Straight Out Of Hell. There are a few that are not as easily likeable, such as the ballad “Hold Me In Your Arms”, but every time I hear it I like it a little better. Helloween also try a few new things here — check out in particular “Wanna Be God”, which works out quite well. My favorites are five of the first six songs on the CD (the exception being “World Of War”) that rock from start to finish with all of the classic Helloween elements that their fans have presumably grown to love. You simply can’t go wrong with “Nabataea”, “Far From The Stars” and “Burning Sun”. However, if you compare the first six songs to the remaining ones on the CD you’ll notice a considerable drop in the quality.

Perhaps Helloween could have dropped a few of the latter songs on Straight Out of Hell so that it only contained mostly great songs, rather than some great ones mixed in with some OK to good ones. At the end of the day though, it doesn’t really matter. Fans get more bang for their buck with 13 songs on the regular CD and an additional two tracks, including a reworked version of “Burning Sun” dedicated to Deep Purple‘s Jon Lord, on the premium edition of the CD.