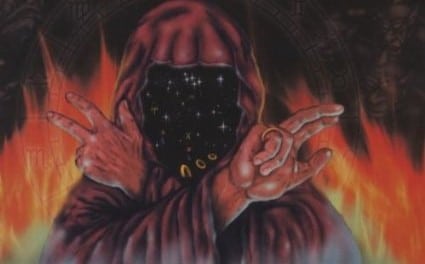 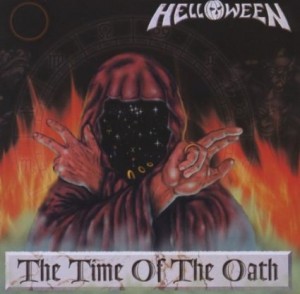 HELLOWEEN
THE TIME OF THE OATH
Released on March 5, 1996 (Raw Power) and remastered in 2006 (Castle Music/Sanctuary)

Review:
It is the 20th year anniversary of the release of Helloween‘s album The Time Of The Oath, which continued the band’s resurgence with new lead vocalist Andi Deris after an experimental and largely ill received phase which produced albums such as Pink Bubbles Go Ape (1991) and Chameleon (1993) with former frontman Michael Kiske at the helm. Although Helloween‘s stellar Master Of The Rings album (released in 1994) served as my music soundtrack while I backpacked Europe for the first four months of 1995, I oddly did not pick up The Time Of The Oath until it was reissued about ten years later with seven bonus tracks. I 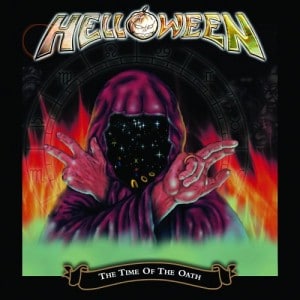 suppose that I always felt like I already knew most of the tracks on The Time Of The Oath from having the German power metal rockers’ live album High Live, which was really a live “best of” of Master Of The Rings and The Time Of The Oath with six songs from each album on that live release.

As it turns out, there were some very good tracks that I was not aware of on The Time Of The Oath until I picked up that album. While High Live clearly presented pretty much all of the heavier tracks on The Time Of The Oath (the title track, “We Burn”, “Wake Up The Mountain”, “Before The War”, “Steel Tormentor” and the sublime “Power”), the studio album is notable for having two ballads on it with the well known “Forever And One (Neverland)” and the lovely “If I Knew.” Considering that there are two more ballads (“Walk Your Way” and “Light In The Sky”) as bonus tracks, my view of The Time Of The Oath once I heard all nineteen tracks changed considerably from thinking that it was one of Helloween‘s heaviest albums to thinking that it was one of their most versatile ones. There are a few gems that have likely been overlooked over the years because Helloween do not play them live. “A Million To One” is a very catchy and melodious tune which I absolutely love. In addition, the very Pink Cream 69 sounding “Anything My Mama Don’t Like” presented a departure for Helloween but one that they pulled off quite nicely.

The bonus tracks are exactly that — extra songs that were not strong enough to make it onto the album but that are still pretty good. Although I was initially a little disappointed with the overall quality of the bonus tracks, it’s kind of nice that the best songs made it onto The Time Of The Oath album rather than surfacing as bonus tracks. Helloween‘s cover of Judas Priest‘s “Electric Eye” is pretty good although I much prefer Priest‘s version of the song. Interestingly, The Time Of The Oath is supposed to be a concept album based on Nostradamus, which Judas Priest later took to another (musically lower) level over a decade later. From what I understand, The Time Of The Oath is the first Helloween album where all five members were credited with some songwriting although guitarist Roland Grapow‘s credited contributions were quite minimal compared to prior albums that he had partaken in.

So how does The Time Of The Oath fare with the rest of Helloween‘s discography? I prefer Master Of The Rings for reasons including that it was my music soundtrack of one of the best and the longest trip of my life. However, The Time Of The Oath has to be in the top three albums with Deris as lead singer and I think ranks just behind Master Of The Rings and The Dark Ride. The Time Of The Oath‘s relevance twenty years later is abundantly clear with Helloween playing four tracks (“Before The War”, “Steel Tormentor”, “Forever And One (Neverland)” and of course the sing along anthem “Power”) from that album on their latest tour in support of their 2015 released My God-Given Right album.

“Forever And One (Neverland)”, a powerful ballad written by singer Andi Deris, was the second single from HELLOWEEN’s album “The Time Of The Oath” from 1996….