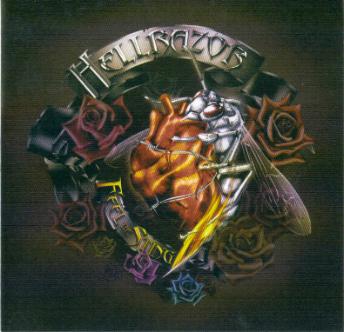 Review:
Hellrazor is a Canadian band that is trying to push their way up the melodic rock heap. The group is actually pretty unique, they have a crisp guitar sound with just the right amount of crunch, some furiously fast drumming and some dreamy vocals. I’m not sure everything fits together perfectly, but it is an interesting and well recorded album.

Musically the band isn’t thrash, but has a few of those elements mixed into their melodic delivery. They have the clear sound, precision playing of normal melodic bands, but just seem faster and more aggressive then most. Yet the vocals have a sort of Sunset Strip glam feel to them and it creates an odd mixture.

There are no songs I hate on Feel The Sting, but at the same time few really kicked my ass. My favorites are “Too Much Is Never Enuff”, “Bad Blood”, “Feel The Sting” and “Guilty As Charged”. For a new band they have crafted some interesting melodies and delivered a top-notch production.

I’m not even sure who I could compare Hellrazor to, they seem to be blazing their own trail here. Feel The Sting is going to be one of those albums that will grow on you over time, its already starting to do that to me. For once a band is trying to be unique without being shitty at the same time.