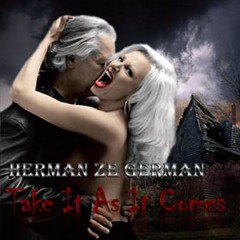 Review:
When Herman Rarebell‘s new album Take It As It Comes arrived I didn’t have high expectations. Why you might ask? Well, I didn’t know what to expect from a guy who quit one of the biggest rock bands in the world — the Scorpions — only to surface later as the head of his own label based in Monaco.

I’ll try to keep it brief — Take It As It Comes finds a wealthy man with too much time on his hands, and a recording studio at his disposal, desperately trying to be avant-garde. This project is probably one of those things that sounded like a good idea at the time and then went completely south. The result is that Take It As It Comes is a mishmash of soulless experimental AOR.

There are a couple of good moments where we find Herman Rarebell keeping it simple and not forcing things. Those moments come during the two good tracks, “Drum Dance” and his version of “Wipe Out”. The other tracks are a toss-up for some of the worst music I have heard in my life. There are a number of originals compositions on Take It As It Comes that could fall victim to this label — but I have to say that, hands down, the distinction of absolute worst belongs to Rarebell‘s horrendous version of the Scorpions‘ “Rock You Like A Hurricane”. On it he does a spoken word thing over a karaoke version — even William Shatner and Pat Boone would call this a train wreck, that’s how awful it is.

Take It As It Comes is hard to digest, and to make matters worse, this stinker was released as Herman Rarebell‘s I’m Back (with the exact same artwork) only three years ago! I thought Vince Neil had the distinction of worst album of 2010… then along comes Herman Rarebell out of nowhere to claim the prize.