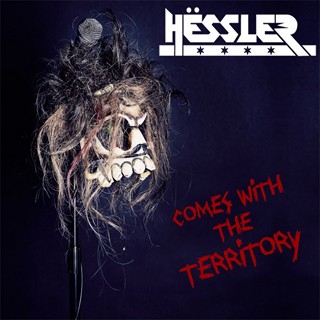 Review:
It’s been over a year since Hessler emerged from the streets of Chicago with their Bad Blood EP. With a steady line-up now in tow, the Windy City rockers have returned with their debut full-length, an album that captures the NWOBHM sound that helped propel the success of heavy metal in the early ’80s.

That is entirely Hessler‘s selling point (besides lead singer Lariyah Daniels stunning looks) — the fact that they play metal anthems with the same drive and desire as historic groups that, over time, became cult legends. Of course following this musical direction means Hessler sounds completely dated, but I think that’s what they’re aiming for on Comes With The Territory. On the opener “Waste Away” a wall of guitars and pounding rhythms back up Daniels‘ gravel throated screams for a triumphant return to heavy metal’s formative late ’70s years. This album takes a similar approach throughout, but I find Hessler is at their best when they ramp up the energy on songs such as the galloping and multi-tempoed “All You’ve Done (Nothing Is New)”, the fist-in-your-face anthem “Taste The Lips”, and the heavy closer “Hate Me, Leave Me”. On tracks such as these Hessler come across as a more traditional sounding Sister Sin with the guitar tandem of Igz Kincaid and Frankie Snakes Sripada proving to be a force on the scene with their high-energy riffs.

One thing that does get a little tiresome on Comes With The Territory are the endless gang vocals on practically every chorus — mixing things up would have given the album more diversity. Also, songs like “Confessions”, “Gone Away” and “Million Lights Above” seem to drag on too long and lack the muscle that Hessler needs in order to thrive. But when you think about it, these are the kind of missteps that could be found on the majority of classic metal albums — heavy metal has never been about perfection, instead it succeeded behind power and aggression… and a lot of trial and error.

Just like the Bad Blood EP, I find Comes With The Territory conquers by taking me back to my childhood when ‘denim and leather’ ruled. I suppose that is what makes Hessler work, they take you on a rollercoaster ride through heavy metal’s storied past — and wraps it all up in a sexy package. You can’t help but like the band’s dedication to an art that fell out of favor decades ago.