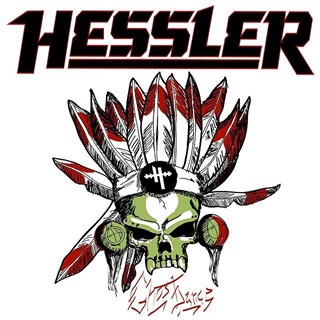 Review:
For me, one of the most anticipated releases of 2014 has been Hessler‘s first album with new lead vocalist Jessikill. With an exciting preview of what the newly revamped Hessler could do in the form of the single “Never Lost My Way”, released some four months ago, I simply could not wait for the new CD. The time has finally come with Ghost Dance. Usually I would complain that there are only six songs offered, but considering that Jessikill has been in the band less than five months, coming up with five really good songs in such a short time span (one of the six songs dates back to 2012) is impressive!

Back in early 2014, former Hessler singer Lariyah Daniels decided to leave the group to relocate from Chicago to Atlanta. Hessler were forced to make a career defining move and replace their blonde bombshell with the model looks, but likely complicated darker personality (just check out her new band Khaotika), in order to forge ahead. The remaining Hessler members decided to put the music first and enlisted diminutive but powerhouse singer Jessikill to join the band. Given the somewhat old school ’80s metal that the Chicago based group play, and the timing in their career, their frontwoman move seems akin to when the mighty Iron Maiden replaced popular punk sounding but vocally limited Paul Di’Anno with powerhouse Bruce Dickinson, who had a much wider vocal range. Will Ghost Dance be to Hessler what The Number Of The Beast was to Iron Maiden? Probably not, but Ghost Dance is definitely one heck of an album.

I readily admit that I have a soft spot for solid hard rock and heavy metal groups fronted by female singers — including Sister Sin, Diemonds and Halestorm — and Hessler fit the mold quite well with Daniels and now very well with Jessikill. Throw in the somewhat old school ’80s metal that Hessler like to play and you truly have a winning combination in my book! The truth is that the addition of Jessikill has brought a new dimension to the band since her voice has way more range and fits the band’s musical style a lot better than her predecessor’s.

Every song on Ghost Dance is a good one. It really is pure head-banging bliss highlighted by Jessikill‘s clear and powerful vocals. The album starts with the title track, which is essentially a fast rocker from start to finish with a slower portion in the middle right before some excellent guitar solos — I particularly like the sort of spoken “Circle of death — circle of life” part of the song. “Darker Secrets”, is even better as it really showcases Jessikill‘s wide vocal range — boy, that young lady can scream and hit those high notes. With some Iron Maiden or Judas Priest riffs, the song has a similar feel to “Fear Of The Dark” — in that it feels like Jessikill is telling you a story and it has some cool “Ooooh Ooooh Ooooh” parts.

The most interesting song on the EP has to be “Last Alive”, simply because Hessler previously released the song as a single in 2012 with Daniels at the helm. When comparing the original to the version on Ghost Dance, this is when you realize just how good Jessikill is because her singing is clearer, she can hit higher notes, and takes the song to the next level. “Stuck On You” is another good song which has some definite Iron Maiden influences. The only thing that I am not crazy about is the sort of falsetto singing that Jessikill adopts on it — it took me awhile to get used to and accept that. “The Cure” is one of my favorite songs on the EP. It is probably the “slowest” song on display but the music really complements Jessikill‘s singing and takes the listener through various progressions. The EP closes with “Never Lost My Way”, and every time I play that final song it feels like I am hearing Hessler‘s “hit single” and I anticipate it will be in the band’s set for the rest of their hopefully long existence.

Hessler have definitely gotten better recording wise with the addition of Jessikill. Suffice to say I have been playing Ghost Dance non-stop ever since receiving it in the mail and I love it a little more each time. This is definitely one of my favorite CDs of 2014 thus far, and I can’t wait to see Hessler play these songs live!