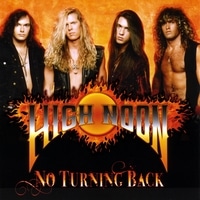 Review:
Upstart reissue label Eonian Records has concentrated on forgotten rock bands on their initial releases, and who better to resurrect than High Noon. The tracks contained on No Turning Back were originally recorded between 1989 and 1994, meaning that the sound quality isn’t always perfect, but it displays a band that had an abundance of talent and how they evolved over the years.

The songs on No Turning Back appear in chronological order which explains why the band sounds so raw and full of energy on “High Noon” and “Bad Moon Risin'”. The first song in particular shows a hungry young band with an excellent sense of groove, all highlighted by the vocals of Jim Zappa. His voice is constantly pushed to the limit, often out of his vocal range, but that feeling of everything about to crash around you has always been a trademark of great hard rock singers.

From there we move onto the next six tracks that were either mixed by Great White‘s Michael Lardie or famed producer Michael Wagener. With their expertise High Noon polished their sound ever so slightly, broadened their horizons and at times tried too hard to be like everyone else. With that being said, “Have My Heart” may in fact be the best song the band ever recorded. It is layered with guitar riffs supplied by Ken Hitsman and harmonized backing vocals while speeding up and slowing down with ease, not to mention vocals that remind the listener of Rhett Forrester at his peak. “When The Night” calls also pushed the band to the edge and is one of those melodic rock numbers that explodes during the chorus that were so popular at the time.

High Noon handled the production on their own for 1991’s “Who Do You Think You Are?”, another song that could have catapulted the band to stardom (but of course didn’t), while “Around Midnight” isn’t the band’s best song but easily one of their heaviest.

From this point on the group started to lose focus as they attempted to restructure their sound when the carpet was ripped out from under hard rock/hair metal. “Bed Of Lies” experiments with funky guitar and bass while both “Weight Of The World” and “House Of Glass” finds the band lost in a changing music scene.

For the most part No Turning Back is an enjoyable listen, although you do have to ‘turn back’ time to truly enjoy it. As great as some of High Noon‘s music is, I found the best part of this CD was listening to the band evolve over the years from raw, hungry artists that eventually hit their peak and then falling from grace. No Turning Back could easily be a soundtrack for a generation of hard rockers.