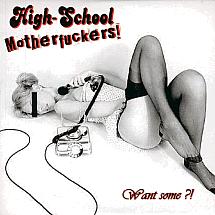 Review:
Originally formed as a Ramones tribute band, it wasn’t long before France’s High-School Motherfuckers were penning their own tunes. Sadly the group dabbles more with punk then they do with rock, which isn’t my bag at all. Everything is being played at 100 mph (or 160 kilometers-per-hour in their home country), with little in the way of finesse or melody.

With that being said, “Rock’N’Roll U” has a Motorhead feel, and even includes a guitar solo – albeit fairly rough. In fact at times the vocals remind me of Aerosmith‘s Steven Tyler. From there things take a predictable turn until “Spider”, which shows that the band is capable of writing a poppy glam tune with pretty good results. The disc ends on a garage glam version of “Blitzkrieg Bop” that I’m not even sure the punks would enjoy.

I like the attitude and the band gets bonus points for a cool album sleeve, but the music isn’t for me. If you enjoy the punkier side of things check out the High-School Motherfuckers at www.highschoolmotherfuckers.fr.fm – as for me, I will stick with gritty and dirty hard rock.