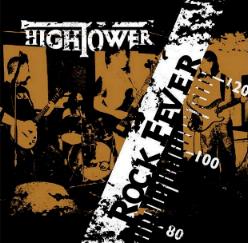 Review:
I’m not sure the world needs another Roxx Gang, but seeing as I liked their early albums I have no problems with Canada’s Hightower. Lead vocalist Ryk Bonus has the same laid back ‘take-it or leave-it’ appeal of Kevin Steele, a delivery I’ve always enjoyed.

There is a lot to like on Rock Fever. All the tunes are groove oriented rockers – no ballads – with great guitars that seem to blend 80s hair metal with 70s simplicity. The band obviously has their tongue firmly in cheek with song titles such as “Heavy Metal Gigolo” and “Rock’N’Roll Vikings”, and the best part is that both songs are great and laughable at the same time. In fact all these songs are damn good, I just wish the choruses were more memorable. The only thing I don’t care for on this release is the group vocals, they sound plain and rather uninspired. But that is nothing more then a minor complaint.

The more I listen to Rock fever the more I enjoy it. I like this singing approach, not many frontmen have this unique style. Hightower is heading in the right direction (I have a feeling they’d be lots of fun live) and with some fine-tuning on their songwriting they could be a band to keep an eye on. A full-length release would be something to look forward to.