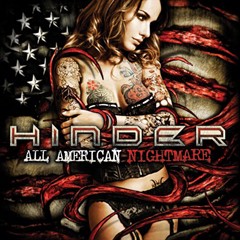 Review:
I never liked ‘modern rock’ bands — the fact that they got signed to major deals while the likes of Crazy Lixx and Babylon Bombs were struggling to find a label at all was frustrating. Because of that frustration I never really listened to any modern bands, but then in 2008 I stumbled upon Hinder‘s “Use Me” video. I saw people comparing them to Motley Crue and Aerosmith so I gave the song a chance…and I was hooked! The album that track appeared on, Take It To The Limit, became one of my favorites of 2008 — blending classic hair-metal elements with an updated production. Therefore, my anticipation for All American Nightmare was steadily rising. Hinder claimed that they had written over 70 songs for pre-production — would they manage to top their predecessor?

Early on it becomes apparent that Hinder are a major label band, which means there has to be a fair share of ballads designed for radio-play. All four of the ballads are incredibly well executed and potential airwave hits, but they do sound a little stereotypical. On Take It To The Limit the rock songs were even stronger than the ballads, unfortunately on All American Nightmare they’re not always on the same level. “2 Sides Of Me”, “Hey Ho”, “Striptease” and “Put That Record On” all contain lots of admirable riffs and sing-along choruses while the title track and “Waking Up The Devil” sees Hinder exploring a heavier side. Somehow I get the feeling they desperately wanted to prove that they can drift into metal as well. I wouldn’t call these two tracks bad, but the bonus song “Good Life” from the ‘Deluxe Edition’ shows what Hinder should be all about — having a good time while wearing their ’80s influence on their sleeves.

A lot of modern bands have been showing a certain ’80s vibe lately. Nickelback hired Mutt Lange to produce their best album to date and Papa Roach are simply a sleaze band these days. Hinder might not be very original, or an extraordinary talented bunch of musicians, but hell… they are once again bringing good-time hard rock to the masses with All American Nightmare. Just remember how rock bands sounded 10 years ago and you will agree that this is a nice evolution. Who knows, maybe they are paving the road for all those underground sleaze bands we all love.

If you consider buying All American Nightmare, and you should if you’re into Motley Crue, Guns N’ Roses and Aerosmith, definitely go for the ‘Deluxe Edition’. “Bad Mutha Fucka” is complete garbage, but “Good Life” is one of the definite highlights.