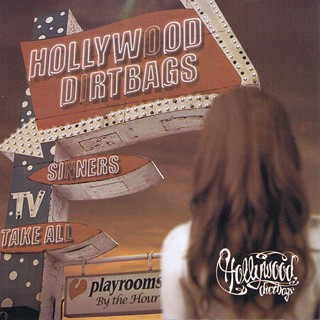 Review:
The Hollywood Dirtbags have ripped a page out of Nashville Pussy‘s playbook (likely using it to roll a joint), and have picked up right where the Crank County Daredevils left off. With a nasty attitude and lyrical content that consists of sex, sex, sex and sex (I’m sensing a trend here), Illinois’ newest sleaze merchants have served up a debut that will appeal to rock fans who like ample amounts of piss with their vinegar.

With screaming vocals, blasting guitars and a pummeling bottom-end, the Hollywood Dirtbags won’t be for everyone. To make a comparison, lots of people watch pornography, men and women alike, but the ‘gonzo’ genre caters to a select audience due to its extreme nature — well, consider Hollywood Dirtbags the ‘gonzo’ of hard rock. Bands such as this are straight-forward in their approach, exchanging originality for break-neck guttural rock.

The nine songs of Sinners Take All are more less interchangeable, yet “That’ Rock-N-Roll”, “Hell In High Heels” (where did that piano come from?), “Backstage Queen”, the bass heavy “Rules Are For Fools” and the title track will get your blood pumping. Thrown in for good measure is a cover of Rose Tattoo‘s “Nice Boys”, making it pretty obvious what kind of music influenced these characters.

Listeners know exactly what to expect from a band such as Hollywood Dirtbags, and you can judge for yourself whether that is a positive or negative. The one complaint I have is the CD’s lackluster production, although I’m guessing these four grease-balls were too busy spending their cash on drugs and strippers to worry about such trivial things.

The picture that graces the final page of Sinners Take All‘s artwork really explains everything. In the photo is a woman in her panties surrounded by items such as handcuffs and alcohol, looking completely spent as she lies upon the bed of a low-budget motel. Spray painted on the wall are the words ‘Hollywood Dirtbags’ — yes they were here, yes they had their fill, and now they are moving on to the next town… you’ve been warned.