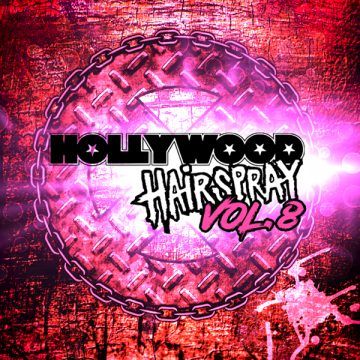 Review:
In a prior review of mine, I had recalled that my first album ever was Michael Jackson‘s Thriller but this review of Hollywood Hairspray Vol. 8 has jogged my memory a little bit more and now I recall that my younger brother and I’s first two albums were actually compilation records that we obtained way back in 1983. I can’t recall the name of one of those compilations (“Rock” something) but the other was Star Tracks, which featured top 40 hits from bands such The Police, Duran Duran, Stray Cats, Journey and Bryan Adams. My favourite track on Star Tracks was Taco‘s eclectic hit single “Puttin’ On The Ritz.” I mention these compilation albums because it was a lot of fun discovering all these different artists and bands, and it was a great way to expand my musical palate at the time. Of course, I eventually discovered Van Halen through their mega-hit “Jump” which reshaped my musical path for the next 36 years.

When I started listening to Perris Records‘ latest compilation album Hollywood Hairspray Vol. 8, it was a lot of fun “rediscovering” some bands while discovering new ones as well. I use the term “rediscovering” loosely as I was familiar with 11 of the 14 bands featured on Hollywood Hairspray Vol. 8 but only had actual records from three of them — 99 Crimes, Loud ‘N’ Nasty and NiteRain. The three bands that I was not familiar with (or didn’t remember) were AOR (France), Collusion (USA, Russia) and Mercy (USA). Funny enough, when I saw the track listing on Hollywood Hairspray Vol. 8, the song that I was most looking forward to hearing was NiteRain‘s demo “Rise Up” but that turned out to be one of the most disappointing tracks. The quality for that track is unfortunately of “demo” quality and really pales in comparison to some of the other songs on the compilation.

It’s funny when you listen to one band’s song after another, certain stick out positively while others, I feel like I want to skip them, and especially when I know what’s coming next. The true standout song on Hollywood Hairspray Vol. 8 is Irish rockers W.A.L.K.E.R.s’ anthem “Time To Party.” The track has a great good time feel to it, reminds me of something that Warrant might have put out back in their heyday and stands out head and shoulders above the other tracks each time that I listen to it. Another great song is Collusion‘s “Dynamite Mary” which verses remind me of a song that I can’t put my finger on. I don’t know how Perris Records found Collusion as the band only has 108 Facebook likes and no website to speak of but the song totally rocks! Other highlights include Russian sleaze rockers Kill City Kills‘ “Wild Brigade” and Mercy‘s “Jet Black Romance.”

I’ve never been much of a melodic rock or AOR fan aside from bands that play a grittier version of it such as Eclipse or H.E.A.T so the couple of real melodic tracks on Hollywood Hairspray Vol. 8  (Morano‘s “After The Love” and AOR‘s “The Smartest Girl In L.A.”) just don’t do it for me although I really like Rain Or Shine‘s “Top of The World” which has a bit more of an edge to it. Interestingly enough, the two tracks that I was most familiar with — 99 Crimes‘ “Rumor” and Loud ‘N’ Nasty‘s “Stand Strong” — are probably in the middle of range in terms of my favourites on Hollywood Hairspray Vol. 8. With respect to 99 Crimes, I really like their self-titled full-length album released earlier this year but I have always felt like there are many better tracks on the record than the slightly slower paced “Rumor.” In terms of Loud ‘N’ Nasty, although I like the song “Stand Strong” and it’s great to have the sleaze rockers back after such a long hiatus, I like their songs off their 2004 album Teaser Teaser a lot more.

Other songs on Hollywood Hairspray Vol. 8 that I find enjoyable are Notörious‘ self-titled track, Voodoo Moonshine‘s “Give It To Me” and Affäire‘s “Highway Affair.” The latter one is a bit of a surprise to me since after the band’s very enjoyable 2015 album At First Sight, I have had a hard time getting into the band’s material including the group’s latest record Less Ain’t More. As it turns out, looking through the Sleaze Roxx archives, Affäire released a video for the song “Highway Affair” way back in 2013, and that song is probably more in line with At First Sight than the band’s newer material. I did mention that there were a few tracks that I though of skipping every time I listen to the album and aside from the two very melodic rock ones previously mentioned, Bad Boy Eddy‘s rather generic track “My Best Friend” does nothing for me.

Overall, Hollywood Hairspray Vol. 8 is a fun album to listen to and brings back memories of when I listened to those first two compilation albums over and over about 36 years ago. Even though I’m the editor of the Sleaze Roxx website, I was still able to discover quite a few new bands that I didn’t know or hadn’t really given that much of a chance. The big winners to my ears are W.A.L.K.E.R. and Kill City Kills since those are the two bands for which I will be seeking out their albums once this review is completed. I would also get any album that Collusion has to offer but from what I can tell, it does not appear that they have released a record just yet. Kudos go out to Perris Records for coming up with its cool eighth edition of its compilation series Hollywood Hairspray and especially for giving a shot to little known bands such as Collusion. You can pick up Hollywood Hairspray Vol. 8 directly from Perris Records‘ website.

99 Crimes “Rumor” lyric video. From the self titled debut album available on Perris Records. ( PerrisRecords.com ) Video edited by Josh Smith. Thanks to Dav…

Rain Or Shine‘s “Top of The World” lyric video:

This is the new single from Rain Or Shine called “Top Of The World” included in the new album “The Darkest Part Of Me”. (out on February 15, 2019)You can fin…

Voodoo Moonshine‘s “Give It To Me” live video: