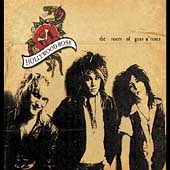 Review:
This new release, showcasing five songs, was the original demo that got Axl Rose and Izzy Stradlin on the road to stardom. It also secured Vicky Hamilton as the manager who would later get Guns N’Roses a deal with Geffen records.

That being said, it is very raw and powerful, just like Axl‘s vocals on these 1984 recordings. You will recognize the song “Anything Goes” from the Guns‘ historic Appetite For Destruction release and “Reckless Life” from the original debut EP Live Like A Suicide. The remaining three tracks are all strong in their own right and give the listener a glimpse of where Izzy and Axl were headed. Axl‘s signature screams and use of different ranges within one song and Izzy‘s scratchy and loose guitar style were clearly developed even in these early recordings.

Guitarist/bassist Chris Weber financed the original demos and was responsible for making this historic recording available to the public. The drums were played by a guy that the band hired from an ad in the Recycler (a popular want ads magazine in Los Angeles). The Roots Of Guns N’Roses contains the original five demo recordings plus five new remixes of the same songs by one time G N’R guitarist Gilby Clarke, with guitar work added by one time Hollywood Rose member Tracii Guns. The same five tracks are also remixed by Cinderella drummer, and one time G N’R fill-in, Fred Coury.

The inserts/packaging contains a nice history with photos and set-lists, plus a history of how Vicky Hamilton came to manage the band, as told by her. For a real taste of early and raw Axl and Izzy, the original demo mixes are amazing and this release is a definite must for your collection.