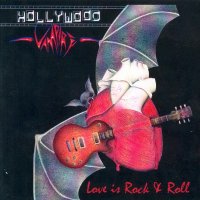 Production:
Produced and mixed by Hollywood Vampire and Dario Patti.

Review:
Naming themselves after an L.A. Guns album was a stroke of genius for Italy’s Hollywood Vampire, because musically any of these songs would have fit comfortably on that release. Originally known as Witch’s Kiss, the band explores the sleazier side of the late 80s Sunset Strip scene. Vampire Kiss list Motley Crue and Guns N’Roses as their influences, and both bands would be proud of their image – leather, cowboy boots, long black hair, cigarettes and Jack Daniels.

Musically the EP kicks off with a guitar rhythm straight out of L.A. Guns‘ playbook, but the vocals are delivered in more of a gritty glam-pop way. “Girl In Action” is the single and is a great rocker, like a less melodic but sleazier Heavens Edge – but the chorus on “I Can’t Wait” is far more addictive. “Hollywood Vampire” is an adrenaline driven rock song with a catchy guitar riff and a cool beat.

The only song I don’t like is the ballad “Gimme One Sign”, which sounds like something you would hear on today’s rock radio (and that is never a good sign). You can download “Girl In Action” at www.hollywoodvampire.it, but unless you are bilingual make sure to click the English button on the right hand side. All-in-all Hollywood Vampire has released a cool demo. I wouldn’t say that it is very original, but how many good bands are anymore?