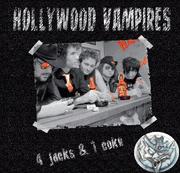 Review:
I’ve always wondered how vocalists for bands such as Dangerous Toys and Spread Eagle can scream for eternity without destroying their voice boxes – well add Hollywood Vampires front man Matt The King to that list. This Italian group (not to be mixed up with countrymen Hollywood Vampire – how confusing is THAT?) has definitely done their homework on what makes sleaze metal so great. 4 Jacks & 1 Coke is mean, nasty and abrasive, just like all good music should be.

If you think the Hollywood Vampires are going to let up, think again – in fact the album even proclaims “this EP does not contain any keyboards or pussy ballads”. Each and every song represented here is being shot at you from a cannon on its way to reaching overdrive. The boys distinguish between a verse and a chorus by implementing gang vocals, but never once slowing things down. The rhythm section keeps a supercharged beat that is as unrelenting as the vocals and guitar solos and fills are well represented. I was going to focus on the best songs here but in all honesty you can’t go wrong with any of these five tracks, and I find my thoughts on what is superior changing with every listen.

The band says they play a hard rock style similar to Rhino Bucket and Jackyl but these guys are further removed from the three chord boogie of AC/DC than those bands. To me sleaze merchants like Spread Eagle and Machinegun Kelly make for better comparisons. Out of Italy’s two Hollywood Vampires I enjoy this version a bit more. Several people say that the current music scene is filled with shit – perhaps that is true for the mainstream but underground bands like this remain the bright spots in an otherwise dismal mainstream. Good music may be harder to find these days, but it is still there polluting the dark alleys and gutters all over the world. The Hollywood Vampires are one of those bands and this debut EP can be bought at www.hollywoodvampires.it.