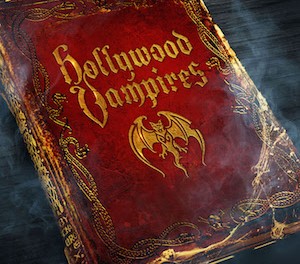 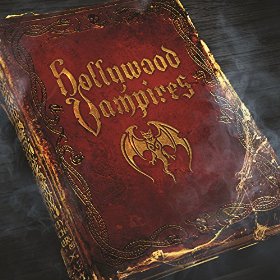 Review:
Hollywood Vampires? Is this a re-release of the L.A. Guns album? No. Is it a new spin-off band by Tracii Guns? Not even close. Is it a new glam band? Wrong again. Hollywood Vampires is actually an all-star band featuring Alice Cooper and a tribute to his mostly dead drinking buddies who died from the excess of the ’70s.

Here’s a quote from Alice Cooper‘s Prime Cuts: “…The Speakeasy and Tramps were the place to be in London. There was a little loft at the Rainbow Bar and Grill in LA (W. Hollywood), they only had that for the club: the club was myself, Keith Moon, Ringo, Micky Dolenz, Harry Nilsson, it was that crowd, every night those same people. Every once in a while John Lennon would come into town or Keith Emerson and they would be honorable members of the night. They still have a plaque there at the Rainbow, where it says ‘The Lair of the Hollywood Vampires.'”

The band members on this recording are a who’s who in Hollywood and the music business. So hear we go. Alice Cooper handles all of the lead vocals on this album and you can hear a lot of the classic era Alice Cooper sound in these tracks. Joe Perry, Johnny Depp and Tommy Henriksen handle the guitars and backing vocals. Matt Sorum and Duff McKagan, former members of Guns N’ Roses handle drums, bass and backing vocals respectively. Then, there is a huge list of guest musicians who appear throughout the tracks. When is the last time you saw an album that included Sir Paul McCartney (The Beatles), Brian Johnson (AC/DC), Robby Krieger (The Doors) and Slash on the same album? This album is probably worth adding to your collection just for the plethora of artists involved.

While this album is mostly cover songs by the various bands in which Alice‘s drinking friends were members, there are three newly written tracks. The first of which is the opening track entitled “The Last Vampire” which is mostly, a spoken segment from Dracula by the late actor, Sir Christopher Lee, who died shortly after the recording. It’s a fitting opener, but I struggle to call it a real track on the album. “Raise The Dead” is the second track on the album and it’s quite a catchy anthem. The last of the new songs is the closing track on the album, “My Dead Drunk Friends.” I actually really like the medley of Alice Cooper‘s own “School’s Out” and Pink Floyd‘s “Another Brick In The Wall Pt. 2.”

I won’t break down each of the cover songs track by track, because most of these are well known songs. However, I would like to say that I like the fact that they kept the original spirit of the songs, all the while trying to make them their own. I’ve always thought that, if a band is going to do cover songs, they shouldn’t do them entirely the same as the originals. After all, what’s the point of that? Just listen to the originals if you’re going to do that.

This album scores a hit as a tribute album. If you’re a fan of Alice Cooper, you’ll probably really enjoy this album. I can’t say that I think this release is essential in any way, but it is quite interesting with all of the history behind it and the musicians involved. So if you have a few extra dollars and want a fun album to listen to, then give the Hollywood Vampires a spin.