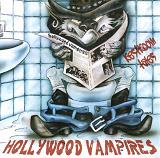 Review:
It has been well over two years since I last heard from Italy’s Hollywood Vampires (not to be confused with a punkish band by the same name that appeared on Glamnation Vol.1), and judging by their new collection of songs it has been way too long. I still can’t figure out why an Italian band would name themselves after an American city, but who cares, they sound like they came out of Los Angeles!

Once again the band are sure to point out that “this EP does not contain any keyboards or pussy ballads”, just non-stop sleaze rock. Vocalist Matt The King still spits out venom with his Cinderella tinged delivery and the remaining band members crank out high voltage rock behind him. “Honeymoon & Silverspoon” starts things off on the right foot, followed closely by the best song on the disc “Ordinary Man”, a song that flat out kicks ass with just a hint of southern rock. “Shot You Down” sounds as if it could be a leftover track from Night Songs while “Moanin” is the song in which the dual guitarists showcase their talents, mixing things up a little bit.

The Hollywood Vampires are back and picking up right where they left off, doing there best to keep the sound of groups such as Cinderella and Spread Eagle alive. I love the artwork on Restroom Tales, but it pals in comparison to the music contained within. This is another band to keep an eye on, and a full-length will be something to look forward to.