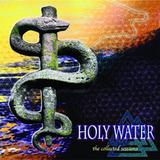 Review:
Holy Water‘s release The Collected Sessions is an interesting slab of AOR. The songs on this CD were collected throughout the band’s career and include recordings from 1982, 1989, the early 90s and today. Because of that the feel of the disc bounces around a bit and some tracks stand out more than others.

The group’s earliest recording is a cover of Elton John‘s “Crocodile Rock”, and it is a rendition that would be better off being permanently forgotten. By 1989 however the band was coming into their own as shown by the perfect AOR track “If I Knew Then…” and the Joe Satriani inspired instrumental “MonsteR Iff”.

In the early 90s everything started falling into place for Holy Water as they hooked up with Foreigner‘s Al Greenwood and hit their melodic rock peak. “I’m Not Worried Anymore” is layered with keyboards and contains the same harmonies that Danger Danger made famous. And then it comes, “Some Things Have To Happen”, the ‘lightning in a bottle’ for Holy Water. The song is AOR will balls, contains a chorus that sounds huge, and is a perfect introduction to this type of music. Some of you may remember the exact same song being released on a sampler a few years back by The Brewz… well guess what, it is the same band and the same killer track!

As for the two new songs, the Stevie Wonder cover “Living For The City” doesn’t really work very well, but “All I Need” is a cool acoustic sounding ballad. However neither song really fits with the band’s earlier bombastic recordings. It is interesting to hear how Holy Water has evolved over almost two decades, but at the same time it makes for a disjointed album.

With members and sidemen of Doro Pesch, Quiet Riot, Widowmaker, Saraya and several more along for the ride you know the musicianship on The Collected Sessions is top-notch. If Holy Water could have written a collection of songs as incredible as “Some Things Have To Happen”, and to a lesser extent “If I Knew Then…”, the band would have been household names. At their best Holy Water is THAT good.