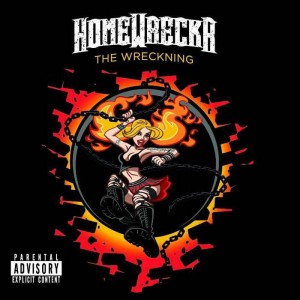 Review:
I recently discovered the band Homewreckr, which hails from Clarkston, Washington. Their debut EP The Wreckning was officially released on June 30, 2015. Upon listening, I was quite surprised that I hadn’t heard of these guys before, mostly because, quite frankly, they are much better than a lot of the other bands making waves these days.

I really like the first two tracks, “Like You” and “Too Hot.” I instantly want to draw a comparison to the band Rough Cutt. The vocalist Kevin Black has a raspy powerful voice, not unlike Paul Shortino from Rough Cutt, Quiet Riot and King Kobra fame. The music comes across as a mix of modern hard rock and metal. It’s also easy to hear influences such as Godsmack and Disturbed without sounding like a clone of them. The music and lyrics are well written and performed at a level that does not feel like a first album. This is an impressive debut with tracks that I can easily imagine hearing on any major rock radio station alongside today’s hottest artists. The production on this album is top notch and it really helps propel these songs to a different level.

The only negative, if there is one, is that I feel like some tracks have a more ’80s metal feel and others a more modern rock sound. It’s not that either one of these are bad, but I think it makes the direction of the release feel a little disjointed. Ideally, if they can merge the old school sound with the new school sound, these guys can easily be major players in the hard rock/metal scene. I am really looking forward to hearing more music from these guys as they are definitely a force to be “wreckn’ed” with. Do yourself a favor and check them out! You can listen to the tracks on Homewreckr‘s Bandcamp page.