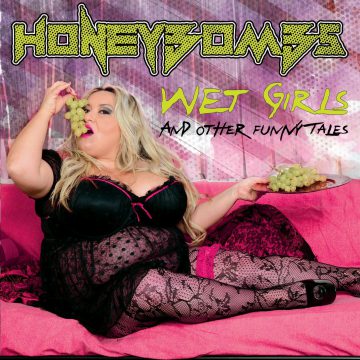 Review:
Radical shit! That is definitely what I thought when I first heard HoneyBombs‘ opening track “Radical Shit” from their debut album Wet Girls And Other Funny Tales. When HoneyBombs‘ CD arrived at the Sleaze Roxx headquarters, the album cover immediately caught my attention. It was not because I was attracted by the obese woman on the front cover but rather due to the band presenting something different and kind of nasty / provoking in a different way. In addition, clearly this was a band that was not taking itself too seriously a la Steel Panther. I quickly flipped the CD case to see what the band members looked like and was relieved that the HoneyBombs members looked like sleaze rock type individuals.

It’s tough these days to come up with something truly original but HoneyBombs have succeeded to come up with something fresh to my ears. Think Steel Panther with a more modern feel and a shitload of gang vocals, and you will have a bit of an idea what HoneyBombs have to offer on their aptly named debut Wet Girls And Other Funny Tales. “Radical Shit” starts things off very strongly with ’80s type guitar riffs and surprisingly, gang vocals throughout the verses of the songs. HoneyBombs‘ singer Andrew “The Eagle” Skid kind of holds himself back but gives little samplings of what a great voice that he has when he lets out some very Michael Starr sounding screams. The lyrics on “Radical Shit” are pretty basic with the words “I Hate…” and “I’m Sorry” getting repeated quite a bit during separate verse portions but they really work well. The song truly is “Radical Shit!”

HoneyBombs just keep going with one good track after another on their debut — well, up to their ballad “Sweet Little Dummy” that I now skip each time. That ballad is really dull and this is likely where you can separate the men from the boys. Steel Panther make a habit of coming up with killer ballads while HoneyBombs really fall short with their one ballad “Sweet Little Dummy.” Aside from the stellar opening track, my favorites are the Italian more modern rock sounding “Don’t Wanna Be Like Johnny” (think Speed Stroke), “Oh My God!” with its easy to sing chorus and nice melodies, and the faster paced “Six Pack On Your Back.” I don’t even mind the growling type vocals at times on certain songs such as “We Are Gonna Kick Your Ass.” The surprise track on the album is the group’s cover of the ’80s classic “Maniac” which was the hit song for the movie Flashdance. HoneyBombs do a great job of making the song their own.

Overall, I have been very impressed with HoneyBombs‘ debut album. Writing killer songs is an art, not a science, and it seems that HoneyBombs are on their way to perfecting the art of writing great songs. If you like Steel Panther with a more modern twist and sleazier feel, you’re likely going to love HoneyBombs.