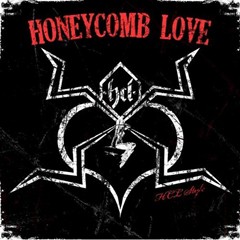 Review:
To say this new U.K. band is a little rough around the edges would be an understatement. However I do hear a lot of potential in this oddly named trio as they deliver sleazy music that comes from the gut and sounds unpretentious.

What I hear while spinning this five song EP are raw rock songs delivered with a vocal style reminiscent of Roxx Gang, yet they are much grittier than that band. While each song is in your face and full of energy, one thing Honeycomb Love are missing is variety. Each of the songs featured on HCL Style are fairly similar to each other. When the band tackles a full-length release they may want to mix things up a little bit, but for a first effort this isn’t that bad.

Honeycomb Love list Motley Crue, Guns N’Roses and L.A. Guns among their influences, and you get the feeling that this young band has the same decadent outlook as their peers did in their formative years. With a little polish songs such as “White Boys Toys”, “Love In Sixth Gear” and “Two Tickets (To The Gun Show)” could be molded into something really special. Honeycomb Love already have the skills, attitude and sleazy demeanor perfected, but they need some guidance to bring everything together. One thing the band has managed to do on this EP is perfectly capture the sound of drummer Luke Vex. It isn’t often you notice a drummer on a CD, unless they are really screwing up, but the sound of the bass drum on these songs packs a hell of a punch.

I have a feeling Honeycomb Love will be able to release an even better collection of songs next time around as HCL Style seems like they are just brushing the surface of what they are capable of. I hope I’m right that these young rockers will be able to kick our asses in the not too distant future — all it is going to take is a little variety and some fine-tuning!