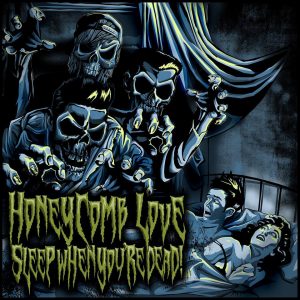 Review:
Color me ashamed by all who fancy themselves fans of music and especially this ole sleazy hard rock genre we gather here to get all excited about. I know there was some mention of Honeycomb Love a long while ago and then they dropped off the/our radar.

Well fortunately for those of us that can’t get enough kick ass rock n’ roll, Honeycomb Love released a killer EP in 2014 entitled Sleep When You’re Dead and I kid you not, this EP slays and you will love it. Love it you say Terry, but hey, where were you when this EP dropped? Heck, 2014! That was two years ago! I know, I know. I was there and snatched it up GREEDILY, but hey color me selfish as I was hoarding this bad boy, savoring every note and fully immersing myself in its hard rock goodness. And besides no better time than now to re-ignite the interest in this bad ass band and encourage them to drop another EP or at least get some new blood into them and over to their site buying their wares.

Ollie Lewis (bass, vocals), Matt Hipkiss (guitar) and Shaun Marsh (drums) create a — tighter than a pair of spandex pants two sizes too small — hard rock, sleazy wall of sound that from the opening notes of “Run For The Money” which is on my list of all-time greatest songs ever. It punches you in the throat and leaves you gasping for air as the band throttles you and throttles forward with an ever continuing barrage of music that you will have on repeat for weeks. I know I did and quite frankly still do. “Gunning For Blood”, “Nightmare”, “Psycho” and “Midnight Subway Train” are equally as heavy and on par with the opener and round out five monster songs. I can’t get over how tight these guys are. They have created five songs that just wail and the breaks, fills and solos (guitar, bass and drums) that are incorporated here will floor you — guaranteed.

So, go nab the EP. You will not be disappointed and if you are in the UK, go to a pub to see these kids live as I have heard the live show takes the songs to a whole new level.

We hope you enjoyed Honeycomb Love’s new single- Run For Your MoneyYou can purchase our brand new E.P through the following links:www.honeycomblove.co.uk & h…