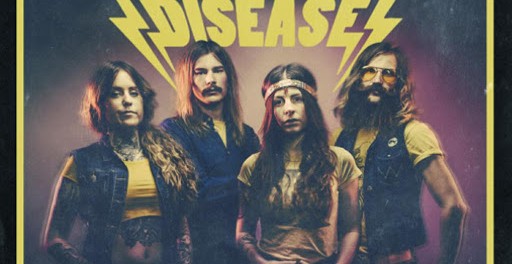 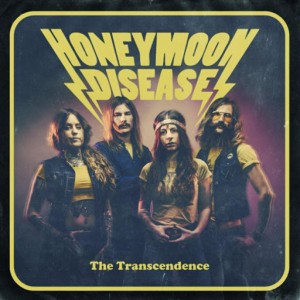 Review:
In my effort to further get into and listen to bands that are a bit outside of my current comfort zone to review for Sleaze Roxx (The Carburetors being another recent review), I bring to you Sweden’s Honeymoon Disease. I’m not typically into retro ’70s sounding bands. So I took the necessary steps including reading the band’s bio material and when hearing “Imperial Mind” in a video teaser, I was immediately struck by how it sounded like it could have been on the first KISS album (with a female singer of course). “You’re Too Late” and “Bellevue Groove” are other songs that seem to have been lifted off that same album. You’ll also find touches of Thin Lizzy (“Stargazer”) and early UFO (“Fast Love”).

I can see how some bands have that ’70s influence but Honeymoon Disease take the steps to mirror the ’70s in every aspect from the band’s image with the flares and bandanas to the album presentation with its color scheme and graininess to, of course, the music. The way in which they play, song structures and sound, it’s all there. I mean is that a Hammond organ on “Keep Me Spinning?” There are plenty of catchy rock n’ roll riffing, dual guitar leads and vocal hooks with the sing along choruses. The production is solid although slightly monotone in sound to give the album that seventies vibe but it is still clear and it lets the instruments come through.

I think this is good in one way for those that miss or are nostalgic for the days of yore, to see or wonder where it all came from, and Honeymoon Disease can definitely fill that void. I got to wonder on the other side of the coin, can this last? This being their debut, only time will tell but as of late, there seems to be a resurgence of bands playing this sound — for example The Spiders, Ghost (to a certain extent) and The Answer which to me tips the hat to Humble Pie and Bad Company.

So, all in all a good release, to get the groove and feel of the ’70s back to those who may have missed it and for those who continue to enjoy it.