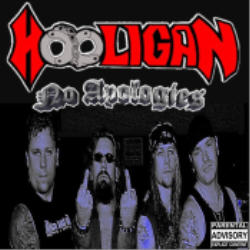 Production:
Produced and engineered by Fab Delmonte and Hooligan.

Review:
I’m guessing that the members of Vancouver’s Hooligan are big fans of Helix because the two bands sound a lot alike, and seeing as I am a huge Helix fan you can imagine what I think of No Apologies. That’s right, I think it is a pretty cool release. While there are lots of similarities between the two groups, this release is much darker and abrasive then classic albums like No Rest For The Wicked. In fact, something that catches my ear are the gang vocals used on the choruses, it gives the songs that anthem quality that made early Twisted Sister so great.

There isn’t much variation on this disc, as every single song attempts to pummel the listener into submission. “Full Scream Ahead” really sets the tone for the entire album as the chorus chants “here I come, full scream ahead”, and the song rumbles down the tracks like a locomotive with bad intentions. “Stand A Little Closer” follows right behind and is as uncompromising as the opener, this band refuses to let up. In fact things keep going in this direction throughout all six songs, abrasive and unrelenting.

As much as I like Hooligan, their delivery is almost too much to take in at once. I think it is a blessing in disguise that this album is only six songs long, I can’t imagine being bludgeoned with a full-length release! Without a doubt Hooligan has aggressive metal down to a science, but I think they have to change things up a little to give the listener a chance to take everything in.

This has to be one of the most professional press kits I have received, which is almost at odds with the band’s fist-pumping metal. Now the next question I have is, are they as good live as Helix? If so, with a little polish and variety Hooligan will be pleasing audiences for many years to come. www.hooliganonline.com