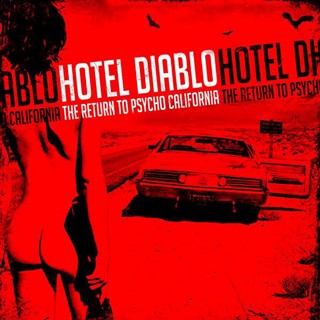 HOTEL DIABLO
THE RETURN TO PSYCHO, CALIFORNIA
Released on June 7, 2012 (Scarlet Records/Entertainment One)

Review:
“Psycho, California is a collection of stories, true stories, experienced during a time when our lives were filled with mind altering shots of wretched adrenaline,” says vocalist Rick Stitch. “Strings got bent, knobs were turned and an uncontrolled visceral energy screamed life into what has become Hotel Diablo’s, Psycho, California.”

When you look at the versatility of talent here you can almost imagine what it’s gonna sound like but then there’s also the worry that the whole thing could collapse under the weight of the ‘supergroup’ tag. The term ‘project’ never aids anybody’s cause either, sometimes feeling somewhat contrived or short term. No such worries though with The Return To Psycho, California which crawls right inside your ears and starts digging from the first track “Taken” with its mashing riff colliding with dark melodic overtones. The vibe throughout is epic yet full of angst and more firmly in the modern, post grunge camp than associations might suggest — and as a result Hotel Diablo are more 30 Seconds To Mars than Guns N’ Roses.

Stitch‘s powerhouse vocals and bleak lyrics skillfully dart between light and shade. “What You Do to Me” is a warm, mournful arena ballad complete with classic solo from Grossi whilst the wretched mid-tempo “Bury You” and the harder “Wicked Lines” work supremely well together with the more melodic “All These Years” to serve up a consistent piece of work all round.

A move to a slightly heavier edge next time might employ that brutal rhythm section a little better, and the album includes a cover of Oasis‘ classic “Wonderwall” which adds little to the proceedings. Nevertheless, The Return To Psycho, California is a devil of a debut and proves once again that the man in the red suit still has all the best tunes.