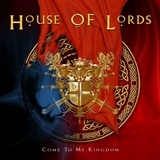 Review:
Another one of Gene Simmons‘ discoveries, House Of Lords is a full-on melodic rock power-ballad band that often drifts into AOR as deep and pulsating guitars tell the stories of heartbreak and despair.

Lead singer James Christian has a subtle yet raspy voice that is usually accompanied with melodic backing vocals. Most of the songs are catchy, with guitars providing great rhythm and fills to the all-important vocals. Come To My Kingdom, the group’s sixth studio release is all too similar to the ever popular ’80s power ballad bands, with no real sense of the time we live in today.

“One Foot In The Dark” is a rocking tune, more upbeat then the rest, with a build of instruments that creates the momentum leading up to the powerful chorus. “I Believe”, the quintessential ballad, has meaningful drums and bass throughout with a very thick melodic chorus. “Another Day In Heaven’s” opening riff is promising, until an electric sounding keyboard and sickly lyrics come in, with it all leading to another full vocal chorus that descends further into the land of power ballads. The title track meanwhile is a surprising change, as it is a heavier song with rhythmic guitars and a killer guitar solo.

House Of Lords have consisted of several different line-ups over the years, with James Christian remaining as the sole original member on Come To My Kingdom. While the CD doesn’t exactly rock, the band can be proud that they released a consistent melodic rock album. Come To My Kingdom may not be the band’s finest hour but they also haven’t tarnished the group’s moniker at all.