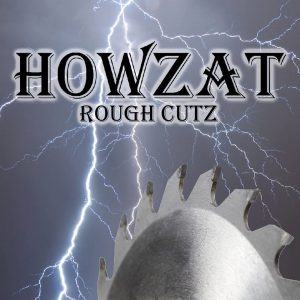 Review:
Howzat are a four-piece from London Ontario, Canada. It seems that outside Toronto, there is a metal corridor in Southern Ontario these days, with the likes of Monster Truck, Damn Pigeon, Löve Razër, and others leading the way. Howzat started life in 2003 as an acoustic act and somewhere along the way grew metal studs and donned leather. Rough Cutz is their first studio release, featuring five songs infused with everything from pop-metal to power metal to straight ahead hard rock. With the EP and a couple of videos under their belt, Howzat are busy in the studio working on what may very well become their first full-length release. Howzat‘s lead singer Kevin Rudy told Sleaze Roxx: “We started out anticipating to just release another EP but we have so many exciting tunes flowing out these days, ya never know…”  I for one am looking forward to where those tunes take them.

This is a band that sounds more mature than it should for its first EP. Clearly, they have rehearsed and gigged long enough to polish their sound before entering the studio, which some groups forget is the cornerstone of a professional band. And while Howzat may be top-notch, I fear the production could be better. The vocals drown out the guitars. The bass could be stronger, and in the case of the song “Haze”, the slide guitar work is buried underneath the rest of the mix, which is a shame because it’s quality stuff.

Speaking of “Haze”, it is the first song on Rough Cutz and does rock. I’m into the guitar groove and can immediately pick up good vibes from the band. And, hey, there’s an organ in the verse I missed in the first few listens… see production issues above.  “Storm” starts with a drum and bass line, and the rest of the band cuts in nicely. It’s not your typical mid-tempo rhythm, which is good. There are twists and turns on this tune for sure.

“House Of Love” is a cool shuffle, but suffers from a less-than-perfect mix.  The vocals take over more than they should. It is still a really good song. I hear a little Brian Vollmer (Helix) in Rudy’s delivery. “Catching You” is pop-metal that would have landed Howzat on the music company radar circa 1988. It’s a simple, yet catchy composition that probably works very well live, as it is upbeat and danceable. The final cut “Stand Up” is a power metal option, heavier than the other four songs, but is a good offering. The active drum line sets the tone.

I shall conclude by suggesting that Howzat are worth following. I do hope they find better production values on their (possible) upcoming full-length release. Each of the songs on Rough Cutz would be a winner live, and for a working band, that counts more than what ultimately gets pressed on vinyl.

Official video of the song ” House of Love”, by Howzat, off there 2016 released EP ” Rough Cutz” www.howzatrocks.com https://itunes.apple.com/ca/album…