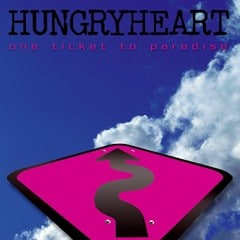 Review:
Hungryheart completely caught me off guard a couple years back when they unleashed their self-titled debut. That CD was such an incredible blend of AOR and melodic hard rock that it quickly became one of my favorite discs from 2008. With their second release, One Ticket To Paradise, Hungryheart has revamped their rhythm section and altered their sound ever so slightly.

The massive choruses and perfected harmonies are still represented on One Ticket To Paradise, but the band seem to have moved further into the AOR direction and thus have left some of the furious hard rock behind. For that reason this new album is mellower than its predecessor while containing the same winning formula in the songwriting. The title track finds these Italians at their best, adding some crunchy riffing to the perfectly crafted melodic rock. “Boulevard Of Love”, “Angela”, “Let’s Keep On Tryin'” and the infectious “Get Lost” also keep the Danger Danger/Saraya inspired ’80s melodic metal coming at you. But for every song that delivers there seems to be one that falls flat. “Let Somebody Love You” and “You Won’t Be Alone” are ballads that comes across as being way too soft, “A Million Miles Away” never seems to find its footing and “Love Is The Right Way” shows some early promise but ends before going anywhere.

Personally I prefer Hungryheart‘s 2008 debut over One Ticket To Paradise. While the band continue to walk that fine line between mellow AOR and picture perfect melodic rock, on this album the scale often tips too far in the former direction. A bit more rock, and a little less easy listening, would have made One Ticket To Paradise a much more consistent album. As it is, Hungryheart are an exceptional band that have released an average album — I know they are capable of so much more.