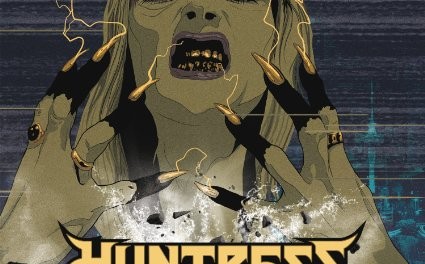 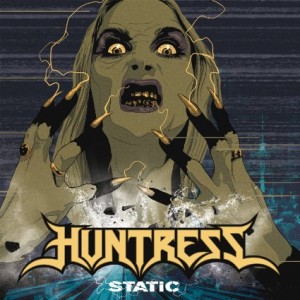 Review by Will “Bones” Lee:
Huntress have always been on my metal radar, but for some reason I have never listened nor own their previous two albums. I guess it’s because general press about them hasn’t been exactly raving about the band and sometimes I get a general metalcore sense about them. I know this can be a bit closed minded but sometimes, time can be at a premium, so I never pursued the matter. So I welcomed the opportunity to listen to this their third album Static, and see what I heard/read and felt was fair. For the most part, I was pleased and some of the criticism is not all deserved I think.

Vocalist Jill Janus may be the selling point and the main draw of the band and also the focus of words about the band both good and bad. I’m not going to dwell or comment on her personal issues with mental problems that I’ve come across in other interviews because I don’t know enough about them or her, so I am just going to focus on the music, because that’s what matters. From initial listens, she does have a powerful voice and it’s prominent in the mix. She gives a strong performance which leads to my next observation with the production. The band’s playing and instruments seem a little subdued, a little far back in the mix which is sort of a bad thing because I’m sure the members are great players but you can’t tell too much. It just seems sort of ordinary and because of this, it feels some of the songs are interchangeable. Nothing really stands out.

The album opener “Sorrow” sets a good standard with Janus‘ soaring vocals giving a good introduction to her capabilities and a catchy chorus. “Mania” is another with that song being more subdued in nature and with better dynamics. It is slower and offers more feeling. The next song “Four Blood Moons” offers a speedier take on what the band has to offer with its speed, more forceful drumming and some minor dual guitar elements. It’s almost a power/speed metal track in nature. I like the lead guitars on the title track “Static” but dang it! I wish they were louder! I want to hear those scorching leads coming from my speakers. But beyond that and despite a few moments within the songs, it’s not a mind blowing experience and like I mentioned with the production, the songs sort of fall flat. It is not a terrible listen and I can see listening to this on and off but as something you reach for years down the line, I’m not so sure.

I am curious to how the band comes across in a live situation and do they have more power and in your face presence to get your attention. It’s kind of like those first three KISS albums. The production and sound did not do them any favors in the early days. They needed to be seen to believed, so I will reserve any harsh words and maybe go listen to the previous Huntress albums and/or hope for better in future releases.

So all in all, not great but not terrible either. There is a sound that I think can be grown and molded to something even greater. Give it a try, check out the videos and see what you think. I like how the roll out video “Flesh” incorporates the artistic/stylistic approach of the cover, which by the way does grab your attention. I have to express a “good job” mention to the artist Vance Kelley.

Review by Metal Headz Media:
Not too many times do you get an album where the first few songs don’t do much for you and you start losing interest in what you are listening too. This was happening to me when I first listened to Static by Huntress. It wasn’t until song five, “Mania,” that I was finally drawn into this album. “Mania” is an eight minute and 43 second song that will take you through a musical journey, very similar to what Black Sabbath does when you listen to their songs. It starts off very slow with lead vocalist, Jill Janus, singing along with slow beautiful guitar work and then does kick in a little louder with a thicker guitar riff. Then about half way through the song is when the tempo picks up and gets you banging your head.

The next four songs (after “Mania”) will still keep you interested in this album with their loud, riff heavy, thrash guitars, banging drums, pounding bass, and with Janus’ distinctive voice. Janus has been open about her battles with mental illness and she wanted to write an album that explained all of her life struggles dealing with this sickness. If you visit the band’s website, Janus will describe to you some life experiences she has been through and what each song is about. It was shocking to me to read about someone going through all of that, and I am glad she has her music to help her cope with this disease.

Static is Huntress‘ third release (second full length, first release was an EP) from Napalm Records. There will be two releases for this album, one with the standard 10 tracks and another one with a bonus track called “Black Tongue” which is dedicated to Janus’ love for Jägermeister. This was my first exposure to Huntress and since this is nothing that really blew me away, it will be something that I will have to give it a few more listens to see if it will grow on me. Maybe Huntress could be one of those bands that will just blow you away in a live setting and will make you want to listen to their albums again and again. I know they have a good fan following and with this release, let’s see if they can grow that base any bigger.

Reviewed by Will “Bones” Lee and Metal Headz Media for Sleaze Roxx, September 2015