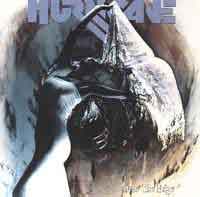 Review:
After revisiting Over The Edge 20 years later, it still is pretty damn disappointing. I know, I know – many, many people think these guys are the cat’s meow and have dropped big bucks to obtain this slab of 80’s rock n roll (before the re-issue, which is absolutely lame! Cardboard sleeve??? No bonus tracks! Same piss poor production as the original release…) Tsk, tsk, tsk.

You would think that with the rock ‘n’ roll royalty lineage of Sarzo and Cavazo that Hurricane would have packed some punch (as their name suggests), but low and behold this album has very few redeeming qualities. It is plagued by poor songwriting, amateurish lyrics and song structure, average (or less) musicianship and a vocalist that stole Jani Lane‘s identity.

In closing, I really did not care for Over The Edge – it is very bland and quite forgettable. And don’t even get me started on “Baby Snakes” or the ultra lame cover of Alice Cooper‘s “I’m Eighteen” (gag). Not much out there is worse than this CD…maybe stepping in a pile a dog dookie barefooted or…