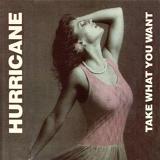 HURRICANE
TAKE WHAT YOU WANT
Released in 1985 (Hurricane); Remastered in 2008 (Caroline Records)

Review:
Few 80s rockers have had their catalogue bootlegged, decimated and mired in controversy to the extreme that Hurricane has. Finally someone has stepped up, as Caroline Records have given the group’s albums a proper legitimate release. Repackaged in ‘Japanese-style mini-vinyl CDs’, these remasters come complete with inner sleeves meant to replicate that of the originals. In the case of Take What You Want the inserts are sparse, so instead the label added four bonus tracks.

For those of you that haven’t heard Hurricane before (although you may remember “Na na na na na na, I’m on to you”) they have the same vibe going on as Y&T (and to a lesser extent later era Whitesnake). Both bands play a melodic and classy version of hard rock, as both groups are fronted by vocalists with silky smooth voices, guys who actually sing! If you haven’t heard of Hurricane OR Y&T, I’m sure your new copy of Blender Magazine will be arriving in the mail shortly.

Aside from the infectiously simple chorus to their biggest single, the aforementioned, “I’m On To You”, Hurricane was best known for its members more famous siblings (Carlos Cavazo and Rudy Sarzo). To write the band off for that simple reason would be selling Hurricane short however, as some of the songs included here could rival that of either Quiet Riot or Whitesnake.

I could have lived without the two instrumentals, but aside from that Take What You Want is almost flawless and sounding better than ever. “Take Me In Your Arms”, “The Girls Are Out Tonight”, “Hot And Heavy” and the best of the bunch, “Hurricane”, all had the potential to be radio staples in the mid-80s.

For whatever reason Hurricane got the shaft during their heyday, an injustice that carried itself forward until now. Finally justice has been served – finally Take What You Want is officially on CD – and finally you can (and should) buy it. This is great stuff from one of those ‘close but no cigar’ type of bands.