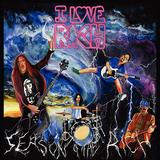 Review:
Judging by the song titles on I Love Rich‘s Season Of The Rich you don’t have to be a brain surgeon to figure out that this EP is going to be full of sexual innuendos. Actually, forget the innuendos, with titles like “Let’s Fuck All Night” and “Everybody’s Getting Laid Tonight”, they aren’t hinting or alluding to anything, they’ve just come straight out with it. Most of the lyrics here are a milder version of the ‘boy’s locker-room’ stuff that Steel Panther has reached success with.

There is a cheesy element about I Love Rich. Lead singer Rich does a good job of convincing the listener that he knows how great he and his band are, but in a farcical kind of a way. From their official site and myspace page, these guys are indeed amusing, with Rich proclaiming about himself, ‘He’s the king of rock’n’roll, all the ladies want his jock, King Kong ain’t got shit on him’. And as much as he probably wants us to believe it, I’m more inclined to guess his tongue is firmly in his cheek. I’ll probably never get to see I Love Rich live, because I live miles away from Chicago, but I’m betting it would be an entertaining show with a party atmosphere because they have that vibe in their music. Listening to this group you can picture them being an over-the-top affair, preening about the stage, having a laugh, and enjoying what they do.

Unless you are humorless or are easily offended, you really can’t help but crack a smile at some of this. Although I Love Rich don’t seem to take themselves too seriously, they shouldn’t be dismissed because musically they aren’t a parody or joke at all. They appear to be pretty accomplished musicians with some tasty riffs and big drums. Rich himself sounds a lot like Paul Stanley which, considering Kiss‘ massive fan base, isn’t a bad thing.

All the songs do have a sameness about them, but then again so do AC/DC and that hasn’t done them any harm. Season Of The Rich is a straight ahead mix of rock and glam with a smirk on its face. It won’t set the world on fire, but it’s perfect if you fancy opening a few cold ones at home and re-creating the feeling that you are out at a sweat soaked bar having a good time with I Love Rich.