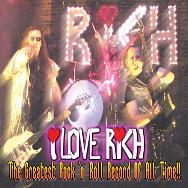 I LOVE RICH
THE GREATEST ROCK’N’ROLL RECORD OF ALL TIME
Released 2001 (I.L.R. Music)

Review:
Claiming to be The Greatest Rock’n’Roll Record Of All Time is a mighty big claim to make. So the question becomes, is this the greatest rock’n’roll record of all time? In one word…NO!!! Let’s face facts; this record is no Alice Cooper Killer or AC/DC Back In Black, so how can it be the greatest? But that’s not to say that this album is horrible, in fact it’s pretty damn entertaining. Perhaps if I Love Rich named the album the Greatest Rock’n’Roll Record Of 2001 they might have got away with it!!

I Love Rich sounds a lot like the obscure punk influenced glam bands of the eighties, such as Queeny Blast Pop and Foxy Roxx. The songs are short, the guitar solos fast, and everything is straight to the point. At times they come across as a faster, punk version of Kiss, as vocalist/bassist Rich can sound allot like Paul Stanley on occasion (check out “Feel The Heat” for proof, a tune that would have felt at home on Dynasty). The one element that is consistent throughout this disc is the sexual references. Song titles such as “World’s Greatest Lover”, “You Want My Action”, “Gonna Gonna Get Some” and “Touch My Sexx” pretty much sum up what this album is all about. I’m sure that the politically correct fools that take I Love Rich too seriously think they are the most conceited and arrogant group of guys on the planet — and while this could in fact be the case — chances are it’s an act to simply get a “rise” out of people.

Sit back with a beer and enjoy the show, cause this is the type of music that not only tries to bring back the fun and outrageousness of the late 80’s, but also the larger than life attitude that came along with it. Grunge specifically tried to kill bands such as this, and now I Love Rich is trying to get revenge.